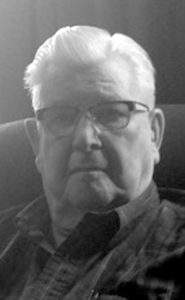 Mr. Robert “Bob” Shearer Sr. of Lethbridge, beloved husband of Mrs. Doris Edna Shearer passed away at their residence on Wednesday, November 15, 2017 at the age of 88 years. Bob Sr. was born to Delmar and Alice Shearer on June 13, 1929 on the farm in Carmangay. He was the middle child of 5 kids. He attended school at Carmangay, Barons and Olds Agricultural College. Bob was the Area Manager in southern Alberta for Alberta Hail and Crop Insurance until his retirement in 1994. He enjoyed his work as it needed him to travel all over s outhern Alberta year round in charge of 14 rural offices for the corporation. Dad was a master mason for most of his adult life and his other interests included sports and more sports: baseball, basketball, hockey, and curling. He rode a horse to school every day as a child so he lost interest in horsemanship early on. He played on quite a few ball teams and was a fairly accomplished pitcher in his day: fastball and baseball. Besides his loving wife Doris, Bob is survived by his 2 daughters Patricia (John) of Edmonton and their 2 sons Eric (Megan) and Ian; Karen (Keith) of Gabriola Island, BC and their 2 sons Mike (Sonja) and Rick; 2 sons Robert Jr. (Wendy) of Vulcan, and their 4 children Ryan (Umma), Lindy (Steve), Cody (Jill), Katie (Kevin); Douglas (Geri) of Lethbridge and their 2 children Nathan and Allison; 7 great-grandchildren Jacob, Thomas, Nicholas, Felix, John Ryan, Dexter and Matthew; sister Carol of Lethbridge; brother David of Fawcett, Ab and numerous nieces, nephews and their families. Bob was predeceased by his parents Delmar and Alice Shearer; and brothers Don and Lyle Shearer. A Celebration of Bob’s Life will be held from 1:00pm to 4:00pm on Wednesday, November 22, 2017, at LUIGI’S PIZZA AND STEAKHOUSE, 1119 Mayor Magrath Dr. S. Lethbridge, Alberta. Cremation entrusted to Martin Brothers Funeral Chapels. For those who wish, memorial donations in Bob’s name may be made to any Cancer charity of their choosing.