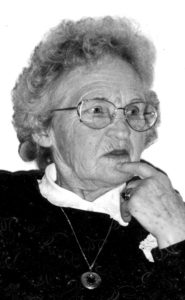 Mrs. Hilda Driedger, beloved wife of Dr. Gerhard Driedger, passed away in Lethbridge on Wednesday, November 22, 2017 at the age of 93 years. Hilda was born on October 11, 1924 and raised on a farm in the Free State of Danzig (that is now northern Poland) near the Vistula River and the Baltic Sea. Raised as a Mennonite, she was the second youngest of 5 brothers and sisters. She excelled at school and wanted to become an architect. However, the war came. She became a refugee in West Germany where she married her childhood sweetheart, Gerhard, in 1945. In 1951, they emigrated to Canada with their first two children, Walter and Renate Maria. They arrived in Coaldale and then moved to Lethbridge where Bernhard was born. Then, in 1957, they moved to Philadelphia where Peter was born. Returning to Lethbridge in 1960, she was active in the church and at home. Hilda and Gerhard travelled to many places, including a year (1970) in Papua New Guinea where they volunteered at a Lutheran Mission. She was the original scrapbooker with many volumes reflecting her life experiences. The grandchildren (9 in all) started to arrive, reigniting her love for small children. Then it was retirement and the great-grandchildren began until there were 10 at last count. Hilda leaves behind her legacy of their cultured “era”. Her sense of tradition and decorum, her ability to put pen to paper and to journalize traditions will always be with us. She was a strong and resourceful woman, an intellectual reader and speaker, and a good listener. She had a sense of humor, she was creative, and she had such a lovely “knowing” smile, always practical and always caring. Always a lover of nature and flowers, Hilda will find new gardens to till and new dishes to cook, because that is what she loved to do. Rest in Peace, Oma. A Memorial Service will be held at 11:00am on Tuesday, November 28, 2017 at CHRIST TRINITY LUTHERAN CHURCH, 416 – 12 Street, Lethbridge, Alberta, with Reverend Olivier Ravelojaona officiating. A Lunch will follow the service along with a Graveside Service at the Mountain View Cemetery. In lieu of flowers, for those who wish, a donation in Hilda’s name can be made to the Christ Trinity Memorial Fund, 416 – 12 Street South, Lethbridge, Alberta, T1J 2R4.

One Condolence for “DRIEDGER, Hilda”