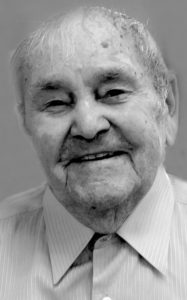 Mr. John Tkachenko, beloved husband of Anna Tkachenko, passed away on Monday, December 4, 2017 at the age of 93 years. John was born in Zaporizhia, Ukraine on June 24, 1924 to George and Julia, one of two children. John married Anna Spizky on October 24, 1942 in Ukraine. Following World War II, John and Anna moved to Belgium where John worked in the coal mines for four years. In 1950, John brought his family to Canada settling in Coaldale. John farmed and worked construction, later moving to Lethbridge in 1958. John worked for General Construction for a short time and in 1959, John purchased a truck and began working with Tollestrup Construction, where he worked for 30 years, retiring in 1989. John enjoyed the outdoors, fishing, and spending time with his grandchildren. John was a founding member of the Holy Trinity Ukrainian Greek Orthodox Church, and helped build the church. John and Anne enjoyed being members of the Lethbridge Senior Citizens Organization. They recently celebrated their 75th Wedding Anniversary. John is predeceased by his parents George and Julia; son, Nick Tkachenko and his wife Linda, as well as his brother Alex. He is survived by John (Betty Ann) Tkachenko, their children Dannielle and Johnny; Natalie McLean (Les Brooks), her son Sam and his father, Grant McLean; Kathy (Ron) Walter, their children Taya and Cole; and by Nick and Linda’s children, Michael (Sheila) and Blake. Also left to mourn are his great-grandchildren, Olivia, Jada and Kennedy, Joel and Shaun. The family would like to thank the staff on 4B at the Chinook Regional Hospital as well as staff at the Good Samaritan’s West Highlands for their care of John. Prayers will be held at 7:00pm on Friday, December 8, 2017 at MARTIN BROTHERS RIVERVIEW CHAPEL, 610 – 4th Street South, Lethbridge, AB. A Funeral Service will be held at 9:00am on Saturday, December 9, 2017 at MARTIN BROTHERS RIVERVIEW CHAPEL, with RT. REV. FR. Taras Krochak officiating. Interment to follow at Mountain View Cemetery.