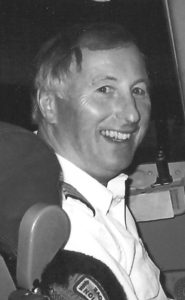 It is with great sadness that we announce the passing of our beloved husband, father and grandfather, DONALD IMRIE ANDERSON FIELDING, at the Claresholm Health Centre, on Saturday, December 9, 2017 at the age of 70 years.

Donald was born in Blackpool, England and spent most of his formative years in the Lake District. He immigrated to Canada in January of 1969, settling in the Toronto area. He met his wife Anne in November of that year, and they were married three months later. Their first son Chris was born in 1976, and their twin sons Michael and Andrew followed in 1979.

Donald’s flying career spanned many decades and continents starting with P.W.A. as a Second Officer in 1973, then continuing on with Canadian Airlines and finally retiring as Captain on the 767 with Air Canada in 2007.

Donald’s quick, quirky humour was legendary and usually caught most people off guard. No matter how long he knew someone, he always seemed to make a lasting impression. His fun-loving ways will be missed by all his family and friends.

He is survived by his loving wife, Anne, son Chris (Jackie) and their children Clara, Harrison and Hanna; and son Michael and his son Daniel. He will be especially missed by his daughter-in-love, Tina, and also by Carmen and Mel; nieces, nephews and numerous family relations.

Donald was predeceased by his parents, his sister Carole and son Andrew. Donald is now walking on streets of gold, glorifying the Lord and being repeatedly subjected to his mother-in-law’s poetry!!!

A Celebration of Donald’s Life will be held at THIRD DAY CHURCH, #90, 550 WT Hill Blvd. South, Lethbridge, AB, on Saturday, December 16, 2017 at 11:00 A.M. with Pastor Dick Deweert officiating. A Private Family Interment at Mountain View Cemetery will precede the service.

In lieu of flowers and in memory of Donald, donations may be made to Dominion Broadcasting Society, c/o Third Day Church, #90, 550 WT Hill Blvd. South, Lethbridge, AB, T1J 4Z9.