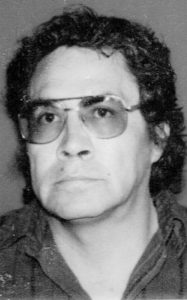 It is with profound sadness we announce the passing of ROLAND, husband, father, grandfather, brother, uncle and a friend. Roland passed away peacefully surrounded by his beloved wife, Peggy, children, grandchildren, extended family and friends at the Cardston Hospital on October 26, 2018. Roland was born at the Blood Indian Hospital on August 10, 1943 to Jim and Isabelle Big Throat.

Roland and Peggy were blessed with 40 years of marriage and together they had 8 children, 30 grandchildren and 22 great-grandchildren. Roland was a loving husband, father and grandfather. He was a hard worker, a good provider to his family. He was most proud of his children and grandchildren’s accomplishments. Roland had a humorous side to him. He liked to joke and tease, he had inside jokes towards his grandchildren. Roland liked travelling and one of his highlights was when he toured Graceland. He drove passed Sun Records and enjoyed a meal in BB King’s House of Blues on Beale Street in Memphis, Tennessee. In his many travels he went down Route 66 in the southern part of the United States. Roland still enjoyed playing basketball with his boys. He also taught his boys how to play guitar and played with the two Jimmy’s. Roland took pride in working around his home, he was very particular in keeping clean both inside and outside the house. Peggy’s siblings grew up by Roland. He was considered one of them and was very close to them. As a young man Roland was given his first guitar by his mom Isabelle and learned to play his favorite rock and western tunes. Roland received his education at the St. Mary’s Indian Residential School and resided there for 11 years. While in school, he joined the St. Mary’s Warriors basketball team where they won the southern Alberta Championship in 1960. At 15 years old, he joined the Army Cadets and spent the summer in Vernon, BC. After leaving school, he worked on his dad’s ranch watching his cattle. He continued educating himself with his reading and shared his knowledge of world affairs with his children.