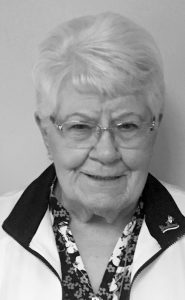 Margaret Theresa Onda beloved wife of the late Mr. John Onda, passed away peacefully at the Chinook Regional Hospital at the age of 85. Margaret was predeceased by her husband John; brothers, Alec, Steve, Willard, Ernie; sisters Mary and Anne. Margaret leaves behind her son Donald; daughter Gloria (Roy) Stewart; grandchildren Benjamin and Ashley Stewart; sister Rose, as well as numerous nieces and nephews. Margaret was born on April 22, 1933 in Stockholm, Saskatchewan. She married John on October 17, 1950. They farmed in Saskatchewan and moved to Warner, Alberta, with young Donald in the mid 1950’s. Margaret loved cooking and worked at the Warner Hotel for many years. She also worked in Milk River at The Fort and then as head cook for 9 years at the Prairie Rose Lodge. She later ran her own café in Warner called The Pool Hall. Margaret loved gardening and looked forward to starting her seedlings each spring. She loved to watch her garden grow and loved to share with her family and friends. She had a green thumb which showed in her flower beds. The inside of her house was filled with plants – her Christmas cactus usually bloomed well into Spring. Margaret loved animals and had a special fondness for cats and dogs. She always looked after any strays that came her way and enjoyed feeding and caring for them. She had a few special pets over the years – Tiger, Niki, Muffy and Babe. Margaret was a devout Catholic and member of the Catholic Women’s League. She was a 30-year member of the Norbridge Senior Center. The family would like to thank Unit 3B at the Chinook Regional Hospital especially Dr. Wilde, Dr. Walsh, Dr. Brower, and nurse Mike for their compassion and care of Margaret. Flowers are gratefully declined. If friends so decide, Memorial Tributes in Margaret’s name may be made to The Lethbridge Humane Society 2920 16 Ave N, Lethbridge AB T1H 5E9. Vigil Rights will be held between 7:00PM and 8:00PM, on Sunday, November 18, 2018, at MARTIN BROTHERS RIVERVIEW CHAPEL, 610-4 Street South, Lethbridge Alberta. A Memorial Mass will be held at 1:00PM, on Monday, November 19, 2018, at OUR LADY OF ASSUMPTION ROMAN CATHOLIC CHURCH, 2405 12 Avenue South, Lethbridge Alberta, with Father Albert Sayson officiating. A private family Interment will take place at a later date at the Warner Cemetery.