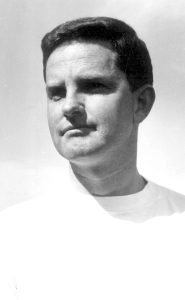 NORMAN JAY LAW, beloved husband of Myrna Gurney Law, passed away peacefully at home in Magrath on Thursday, December 6, 2018, at the age of 82 years.

Norman was born 3 March 1936,4th child of Edwin Tolhurst Law and Eliza Marie Judd. He was born in Lethbridge on a typical winter day of snow storm and 40 degrees below zero.

Norm served a mission for The Church of Jesus Christ of Latter Day Saints in South Africa. When released from their mission in 1958, Norm and a couple of missionaries travelled from South Africa to Cairo, Egypt; Brussels, Belgium; and to London, England to attend the London Temple dedication. They then returned home by ship and train to Alberta.

In 1959 Norm married his best friends’ younger sister, Myrna Gurney and they lived in Calgary where Norm was employed with an electrical company. The job was short lived, as farming was in his blood.

His working career began at farming with his father and brothers. In 1963, the urge to further his education found the family at Utah State University in Logan, Utah. He worked harvesting peas and corn for the Brigham Canning Company, then as interviewer for Utah Employment Agency in Brigham City and Provo, Utah. Also, general contractor, electrician, and fiber optic technician. After his father’s passing, the family returned to Magrath and the farm in Spring Coulee where he managed this business for a number of years. Hauling fertilizer for Green Acres delighted him as he travelled to many farms in Southern Alberta. Then in 1980, back to construction in Utah. Norman and Myrna retired in June 1999, and left Utah for a home in Magrath.

Their two children brought them much happiness over the years, and were a huge help whether on the farm, or living the city life in Logan to Brigham City, to Provo, Utah. Skiing and camping Utah mountains, picking fruit from our backyard, or a trip to Disneyland in California.

Service work in Magrath included electrical, carpentry, plumbing, and painting at The Magrath Museum. He also enjoyed yard work, and his ride on the lawn mower.

The family, especially Myrna, would like to express our gratitude to Russ Barnett for his compassionate service, whether early morning or late night, and to the ward family, and the Priest Quorum.

The Funeral Service will be held at the Church of Jesus Christ of Latter-day Saints, Magrath Alberta Stake Center on Saturday, December 15th, 2018 at 2:00 p.m.