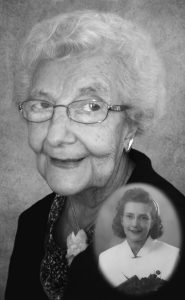 DORIS ANNE HUNT, beloved wife of the late George Hunt, passed away peacefully at the Fairmont Extendicare, on Sunday, December 16, 2018 at the age of 95 years.

Doris Anne Hunt came into this world on July 23, 1923. She was the second of three children for Sylvester and Francis Stade. She grew up on the family farm south of Cabri, Saskatchewan along with her brothers Bob and Harold. Adventures with her brothers and their horses were often shared when she talked about her early years. Doris had many great memories of gathering with neighbours to skate on nearby Boggy Lake and taking part in baseball, basketball and track and field during her school years.

Doris left the farm following high school to move to Lethbridge where she trained at the Galt School of Nursing. She graduated in 1946 and began her life long career working at the Galt, St. Michaels and the Municipal Hospitals. Her preferred area was on the maternity ward. On outings she would frequently run into former patients who would delight in updating her about their babies which she had either helped deliver or cared for in the nursery. They would share how much her wonderful care had meant to them.

Doris met George Hunt, her husband of 42 years, in 1944. They had great times with friends and family, attending swimming meets, dancing on Saturday nights and taking vacations around the world or camping in their motor home. She and George were members of St. Augustine’s Anglican church.

Doris loved spending time and helping with her seven grandchildren, especially when they were babies. As they got older she enjoyed following their sporting activities, going shopping, baking for them and spending holidays with them.

Doris was predeceased by her husband, George; her son, Kevin and granddaughter, Tikeesha Dawn.