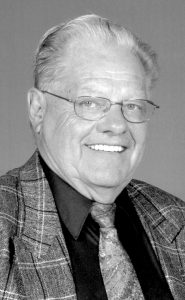 Herb Klassen of Coaldale, beloved husband of Elsie Klassen, passed away peacefully surrounded by his family on Sunday, December 16, 2018 at the age of 85 years. Herb was born in Bassano to Cornelius & Tina Klassen on August 10, 1933. When Herbs parents were hailed out, they packed their meager belongings and moved to Coaldale. Herb attended school in Coaldale where he excelled at many sports. In High School, he met the love of his life, Elsie. In 1956, they were married. Herb worked as a lab technician at the Research Center for 18 years, first at the wool labs and later diagnosing rabies for all of Western Canada. During that time, an opportunity came along for him to purchase an Insurance Business. After three years of working both jobs, he was able to purchase another Insurance agency allowing him to work full time in Insurance. In 1984, Herb went into Real Estate & Development and his son continued the Insurance business. Being a community minded person, he served terms on a School Board, Police Commissions & the Real Estate Board. He was also involved with Church, Boys Brigade and Camp Evergreen. Herb will be lovingly remembered by his wife Elsie, son Howard (Susan), daughters Barb & Joan (Dale) Graff, Jim Betts and his grandchildren Trevor & Tari Klassen & Derek & Christie Graff. In lieu of flowers, Memorial donations may be made to MCC at the Thrift store at 1117 2A Avenue North Lethbridge. A Celebration of Life will be held at 11:00AM on Friday, December 21, 2018 at the EVANGELICAL FREE CHURCH, in Lethbridge, Alberta, located at 4717 24 Avenue South.