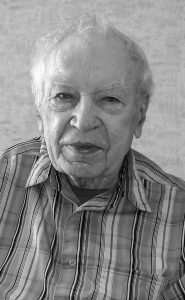 GEORGE EUGENE BISHOFF passed away in Lethbridge, AB, on Thursday, December 21, 2018, at the age of 85 years.

Dad was predeceased by his wife Peggy and his parents Leonard & Anna Mary.

Dad was born January 14th, 1933 on the family farm in Mendham, Saskatchewan. At the age of about six, he moved with his parents to their new farm in Acadia Valley, Alberta. From there, Dad attended the country school, west of the farm as well as the Warren Peers School in Acadia Valley. Once grade school was completed, he attended college at St. Thomas College in North Battleford, Saskatchewan.

In the years following college, Dad worked for the Toronto Dominion Bank, both in Oyen, Alberta as well as Smiley, Saskatchewan. It was in Smiley where Dad met the love of his life, Peggy Montgomery, where they

both worked at the Toronto Dominion Bank as tellers. They were married February 16th, 1957 in Acadia Valley, Alberta, and it was there they started their family. At this point, Dad had several jobs, and in the summer of 1967, our family moved to Oyen where Mom & Dad had several businesses which included a Sears catalogue store and a bus route as well as farming our land in Acadia Valley. In the summer of 1998, Mom & Dad retired to Lethbridge where they lived until their passing.

He was a hard worker and taught us his work ethic and the important things we needed to know in life.

Dad was a gentleman and a gentle man who will be dearly missed by all who knew him.

A special thank you to the staff of Fairmont Extendicare for the care and kindness shown to Dad for the past six years.