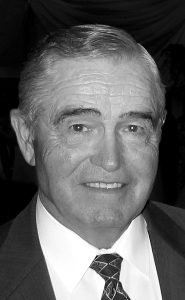 It is with sadness that we announce the passing of Robert “Nick” Lastuka on Sunday, January 06, 2019 … but it is with great love and admiration that we remember our husband, Dad, Grandpa and Great-grandpa.

Dad was born in Slobodiya, Ukraine on May 02, 1928. When he was two months old his father left his wife and two sons behind to create a new and better life for them in Canada. It would be eight years before they would see each other again. Perhaps it was that separation that led Dad to be an independent spirit, for at the age of 16, he left home and found employment with Johnson Brothers Sawmill west of Fort Macleod where he was welcomed and embraced by the Johnson family and others at the mill. Dad always told us that he really grew up there, and it shaped the man he would become. Eventually Dad would reunite with his family … helping with the farming in summers and working in the sawmills in winter. He moved home permanently when his father passed away in 1954 and became a loving mentor to his younger sister Gina and brother John. Dad farmed Grandma’s land in exchange for a share of the crops, which then enabled him to rent some land of his own. On April 19, 1958 Dad married Mom, Ann Leverick of Kipp, and together they worked hard until they were finally able to buy Grandma’s land in 1965.

Family was the most important thing in Dad’s life and we have so many wonderful memories to cherish. He loved Mom with all his heart and you could see that love just by the way he would look at her. As children, we couldn’t have asked for a better dad. He was always loving and kind … setting a good example … showing interest in what we were doing … laughing at all of our antics.

As the kids married, Dad welcomed each new member of the family as one of his own. His love was true and genuine. But the grandchildren were the lucky ones! Dad was always first in line to cuddle the babies and, before long, he was following them to baseball diamonds, soccer fields, BMX tracks, curling rinks, school concerts, track meets, ballet performances and piano recitals. In 2013 he became a Great-Grandpa and was so proud of that! He was a humble, gentle, hard-working man who put his family first.

Dad was active in his community and took great pride in being a member of the Wrentham Lions Club, Curling Club, School and Community Centre Boards. When he and Mom retired to Lethbridge, their involvement continued as they became members of the Lethbridge Country Club and Curling Club. Dad also took his turn on the condo board. He enjoyed his golf buddies and billiard chums, and retirement looked really good on him!

In recent years, Dad’s health deteriorated after a stroke left him with difficulty walking and seeing … but he never lost his interest in his family and was a kind and caring friend to all. On December 30th Mom, all of us kids, and most of the grandchildren gathered around Dad for a big group hug. It was the best Christmas present we’ve ever given him.

Dad is also survived by his sisters MaryAnn (Frank) Pavka and Gina Baird, by his brother John (Heidi) Lastuka and by his sister-in-law June Lastuka.

Dad was predeceased by his brother Bill Lastuka and brother-in-law Garry Baird.

A Celebration of Life will be held at 2:00PM, on Saturday, January 19, 2019, at the LETHBRIDGE COUNTRY CLUB, 101 Country Club Road, Lethbridge, Alberta.

For those who wish, memorial donations may be made to the Heart & Stroke Foundation of Alberta, Box 2211, Lethbridge, Alberta, T1J 4K7.

One Condolence for “LASTUKA, Robert”