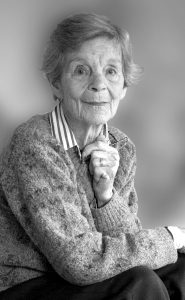 Patricia Blanche Broadbent (née Sambell) Died January 18, 2019, Lethbridge, Alberta The most inspiring, supportive and encouraging person in our lives took her final breath at the age of 89 years. Patricia is survived by her husband Michael Broadbent, her daughter Jane (Greg) Senda and her grandchildren Mika Senda and Teio Senda, as well as brothers Bernard Sambell and Reginald Sambell,and many nieces and nephews. She was predeceased by her son Keith, parents Rose and Frank, brothers Leonard, Edward, Benjamin, John, Keith, Albert, and her sister Rosina. Patricia was born to Rose and Frank Sambell on June 2, 1929 in London, England. It was here where she started a long career as a seamstress. As a young apprentice she had the opportunity to participate in the hand stitching of Queen Elizabeth II’s wedding dress. Patricia’s husband Michael tells a story of how they met. He relates “I ‘stalked’ that beautiful girl on the bus”. Two years later they were wed. Patricia and Michael had 70 years of happily married life. In 1952, she and Michael brought their children Keith and Jane to Canada, to London and then to Windsor, Ontario Canada where she and Michael resided for 50 years. As well as being an expert seamstress, Patricia sold real estate and nurtured a spectacular garden. However, her main focus in life was her family and raising, supporting and encouraging her children and grandchildren. She was, more than anything, an elegant, spirited and strongly capable woman way ahead of her times. There is no funeral by request. If desired, memorial donations can be made to the charity of your choice.