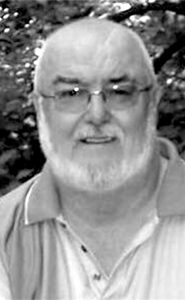 MR. GARRY LAWRENCE ALLISON, beloved husband of Mary Allison of Coalhurst, passed away peacefully on Sunday, January 20, 2019 in Lethbridge at the age of 77 years. He is also the loving father of Kathy Winfield of Tucson Arizona, Shannon (Larry) Gordon of Edmonton AB, Jason (Sherida) Allison of Edmonton AB, Jackie (Myrle) Rodgers of Lethbridge AB, T-Jay Allison of Coalhurst AB, Cheyenne Allison of Lethbridge AB and Melissa Allison of Coalhurst AB. Garry also has 20 grandchildren and 7 great grandchildren. He was predeceased by his father Andrew Allison, mother Lily Allison and step mother Mona Allison. Garry was born in Lethbridge on December 10, 1941. He served as Sports Editor of the Lethbridge Herald as well as District Editor, City Editor and at the end of his career in 2002, he was the Outdoors Editor. Garry moved into the Lethbridge Herald’s sports department fulltime in 1974, after spending 1957 to 1974 as a printer with the paper. An avid rodeo fan, he covered the sport throughout Southern Alberta from the mid 1960’s until his retirement in 2002. Garry was able to attend the first ten Canadian Finals Rodeos as well as numerous Calgary Stampedes and North American Amateur Championship rodeos in Denver, Colorado and El Paso, Texas. He also covered uncountable rodeos and horse races on the Kainai and Piikani reserves. Garry earned the Thompson Newspaper National and Regional awards for achievement, national awards and local awards for his extensive coverage of rodeo, high school sports and the outdoors. In 1979, he won the Max Bell Memorial Award for outstanding coverage of amateur sports in Alberta, and as a result he is enshrined in the Alberta Sports Hall of Fame as well as the Lethbridge Sports Hall of Fame. He has received the Canadian Professional Rodeo Cowboys Associations Jimmy Brown award for rodeo coverage in Canada, on the national and local level. He has been honoured by the Alberta and Lethbridge Fish and Game Associations, as well as Trout Unlimited Canada’s Lethbridge Chapter. In non-sports fields the General Stewart Branch of the Royal Canadian Legion, Korean War Veteran’s Association, the Great Canadian Plains Railway Society and the town of Coalhurst have all honoured him. Garry was given a special Blackfoot name, Piitaominni, (Eagle Wing), by the Piikani Nation through the Head-Smashed-In Buffalo Jump Interpretive Center in 1996. Garry was a member of the Head-dress Society of the Kainai Nation and in 2000 was honoured by the National Aboriginal Day at Fort Whoop Up. In 2002 he received the Queen’s Golden Jubilee Medal. Garry also spent ten years coaching high school girl’s basketball, nine at Coalhurst and one at Winston Churchill, coaching senior girls for eight of those years. He was also an organizer, along with the late Bill Binning, of the Lethbridge LDS Father and Son Banquet which ran from the late 1970s into the 1980s. Garry was a former member of the 702 Wing, vice-president of the Lethbridge Historical Society and was a 31-year member of the General Stewart Branch of the Royal Canadian Legion. Since retiring in 2002, Garry continued writing for the Rocky Mountain Turf Club. He also wrote several history books for the Lethbridge Historical Society and the Lethbridge Exhibition. Garry and his wife Mary have been married for 55 years. They also were foster parents for 32 years, caring for 78 children. He will be dearly missed by all who knew him. The Funeral Service will be held on Saturday, January 26, 2019 at 11:00 a.m. in The Church of Jesus Christ of Latter-day Saints, 560 Highlands Blvd W, Lethbridge. Friends may meet with the family prior to the service from 9:45 to 10:45 a.m. Interment will follow in the Mountain View Cemetery, Lethbridge.

One Condolence for “ALLISON, Garry”