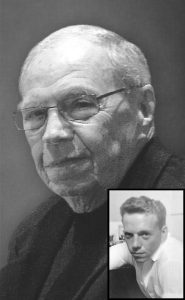 After a week-long stay in hospital, JAMES ARTHUR “JIM” CRAIG lost his battle with cancer, flu and pneumonia on Tuesday, January 22, 2019 at the age of 86 years.

He leaves behind his beloved wife of 63 years, Lorelli, his sons, Scott and Mike, his grandchildren, Madison and Devun, his nephew, Lawrie and his niece, Tami of the United States, as well as numerous cousins.

He was predeceased by his parents, Roy & Ruth Craig and his brother, Gordon.

James Arthur Craig was born on March 17, 1932 and lived on the family farm northwest of Barons. He attended the Barons School. On October 29, 1955, he married Lorelli and they farmed until 1963 before moving to Lethbridge. His big break came in 1967 when the University of Lethbridge accepted its first “mature” students. By 1970 the job market for teachers had dried up, causing him to abandon his dream; however, in the last week of August that year, he landed a job at Fleetwood-Bawden teaching the sixth grade, where he remained until his retirement in 1993. He had finished his degree in 1972, and he and Lorelli graduated together.

Retirement meant Jim could do all the things he enjoyed. He was a wonderful gardener and the backyard always looked like a pristine park. He was an avid reader of newspapers, fictions and biographies. He would start every day with a crossword puzzle and would end with a long walk or bike ride through Indian Battle Park – weather permitting. He played the piano and was known for his skills as a handyman. His tech support skills, on the other hand, were notorious for bringing out his “colourful” vocabulary. He cooked meals, baked bread and concocted delightful desserts.

The Craigs enjoyed having friends over, the symphony and University of Lethbridge productions. They also loved traveling, with New York and Italy topping the list of Jim’s favourite places.

We will miss Jim’s wit, his laid-back demeanor and his great ability to be a true friend. He embraced life and lived every day to the fullest.

Flowers are respectfully declined. If desired, a donation may be made to the charity of your choice.