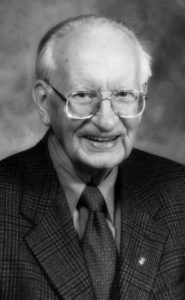 Born in Baaronhof in the Free City of Danzig, Gerhard was the second of three sons born to Walter and Helene Driedger.

In 1942 he enlisted in the German Army Medical Service. This enabled him to start his medical studies in 1943. While still a Prisoner of War in June 1945, he married Hilda Esau, his childhood sweetheart and wife for the next 72 years. The War over, he resumed his medical studies at the University of Kiel graduating in 1948. He interned at the Mennonite Central Committee hospital in Gronau and began a surgical residence in Coblenz.

In 1951, the family emigrated to Canada and settled in Lethbridge Alberta. After success in his Dominion Council Exams and working in General Practice for three years, he embarked on postgraduate Orthopaedics Studies at the University of Pennsylvania. Returning to Lethbridge in 1960, he was made a fellow of the Royal College of Surgeons in Canada. He became Chief of Surgery at the Municipal Hospital for 10 years, President of the Alberta Orthopaedics Society and founding president of the Lethbridge Surgical Society. He served as a medical missionary at the Lutheran Hospital in Yagaum, New Guinea in 1969-70. By 1988, he reduced his workload for health reasons and retired in 1995.

Always an avid history buff, he then wrote a history of his ancestoral homeland, “The Werder” (The Land of the Vistula River Delta).

The Driedger family were members of Christ Trinity Lutheran Church in Lethbridge since 1954. Gerhard served on the congregational council as well as the Evangelical Lutheran Church Council for many years.

Funeral Service will be held at 11:00 am at Christ Trinity Lutheran Church, 416 12 St S, Lethbridge, on 4 February, 2019. In lieu of flowers, donations may be made to the memorial fund of the church.

Arrangements are by McInnis and Holloway Funeral Homes,