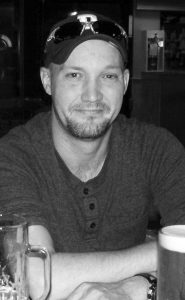 Chadwick is survived by his mother Cheryl Smith of Regina, SK, father Daryl Lennox (Wendy) of Fort Qu’Appelle, SK, his sister Crystal Smith (Sean Beardow) of New Westminster, BC and grandmother Lou Lennox of Fort Qu’Appelle, SK as well as many aunts, uncles and cousins and his extended family Tyler, Nicole, Tyson and Alexis Perkins of Lethbridge, SK and, of course, his beloved cat Rudi.

Chad was born in Regina, Saskatchewan and lived there until he moved to Lethbridge in 2004. A hard worker, Chad worked in various kitchens and manual labour positions for most of his life. Over the past 10 years, Chad has been a valued employee at Haul-All as a fabricator building different types of containers, including the wildlife-proof Hid-A-Bag that appears in parks across Canada. Chad’s work ethic was to be admired by many and he will truly be missed by the company and co-workers.

Chad loved animals of all kinds but none more than his partner in crime, Rudi the Cat. Anyone who knew Chad, knew of Rudi. Rudi will be moving in with Chad’s mother in Saskatchewan.

He also had a love of collecting coins and it was not uncommon for Chad to go through your change to make sure there was nothing special in the pile. He loved sports, especially his teams – the Toronto Maple Leafs, New York Yankees, BC Lions and the Dallas Cowboys.

Chad was an avid pool player, often earning top spot in many tournaments. His pool league friends were like family to Chad and we know he will be deeply missed. Chad was a quiet man, but a kind and caring man and would give the shirt off his back to help anyone in need. If you needed a hand, he was often the first one to show up and the last one to leave. He will be missed by all that knew him.

One Condolence for “SMITH, Chadwick”