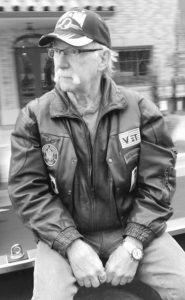 Born in Edmonton, Alberta, Dad was humble about his U.S. military service in Vietnam, with the 704th Maintenance Battalion 4th infantry division, after which he continued his career as an aircraft maintenance engineer.

Besides being a great father, Dad was a husband, who dearly loved our Mom Garda, and didn’t want to do much without her by his side. He was the anchor of the family, a dedicated foster Dad for 25 years, and a proud Boppa. He was the oldest brother in the Thompson clan.

He was a big kid.

Dad was passionate about his Harley and the brotherhood of the legion riders.

He loved flying, fishing, horses, Mexico, “fixing” in his garage, camping in his motorhome, cooking (especially breakfast), harassing Mom, and all things shiny, just to name a few.

Dad was the salt of the earth, a man among men, he would go above and beyond for anyone in need. Brilliant, charming, he had a way with words, and would have done a much better job at writing this than us. Man, we will miss you!

There will be a combined American Legion Riders and Patriot Guard Ceremony potluck at the American Legion, Post 86, 4580 Legion Drive, Blaine, Washington on February 17, at 13:00 hours.

A celebration of life will be held at the Royal Canadian Legion, 324 Mayor Magrath Drive South, Lethbridge, Alberta on March the 09th from 13:00 to 17:00.