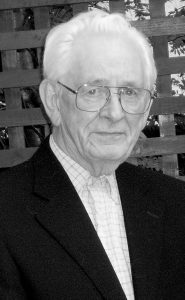 WILFRED RANKIN HODGINS
(1921 – 2018) Faithful in  character, disciplined in all matters and committed to his family would simply describe the life of our father, Rankin Hodgins, who died on Dec. 25, 2018. From Dad’s humble beginnings on November 22, 1921 in a rural outpost hospital in Wakaw, SK, to his gentle passing at home with family surrounding him, his 97 years were championed by good health and satisfaction in the simple things that life offered.
Dad was predeceased by his wife, Daphne (Dundas) Hodgins in 2006, after 57 years of marriage, and his beloved granddaughter Jenna Lowen in 1991. Dad was also predeceased by his parents Wilfred and Rachel Hodgins and his treasured younger brothers Bill Hodgins and Dr. Ken Hodgins. Remembering with great fondness and admiration are sons Bill, Douglas (Kelly), Robert (Ivy), John (Maria) and only daughter Valerie (Mike Lowen). He is survived by sister-in-law Donna Hodgins and two nieces and two nephews. Dad had great hope for the next generation and was thrilled with news of the birth of each of his grandchildren, Daniel, Amy, Tess, Mckenzie, Anna-Lise, Cameron, Mark, Jenna, Kaitlyn, Erin, Carolina, Emily, Iliana, and then 7 great grandchildren.
Dad spent his early years on the family farm in Domremy, SK and saw firsthand the effects of the Great Depression followed by World War II. Dad entertained us with his stories of his early years in northern Saskatchewan, which included riding a horse several miles to school in the depth of winter at age 7, and living in an unheated granary during the winter on the school grounds where he attended high school. He often had tears about how difficult life was and was amazed at the progress he saw over his nearly 100 years of living. Following in his mother’s footsteps, he attended Teachers College in Saskatoon, at the age of 17. Dad’s strong work ethic was rewarded with excellent grades and he was awarded a teacher’s certificate at age 18. He struck off to the one-room schoolhouse teaching at Quill Lake, SK and then to a two-room schoolhouse in Harris, SK. Dad said he really didn’t see himself as much of a teacher and couldn’t see that he would have a financial future that was promising. With the looming threat of World War II, he was thankful for the opportunity to attend the University of Saskatchewan and graduated with a Bachelor’s degree in Mathematics and Physics in 1945.
After graduating, his entrepreneurial leanings look hold, and he began selling life insurance for Continental Life in Saskatoon. He was transferred to Regina and became the Branch Manager. A referred prospect in Pelly, SK was one Daphne Dundas. After 6 weeks of dating, which was largely done by correspondence, a marriage proposal was made and mum and dad were married 6 months later in 1949. They lived in Regina where Bill, Doug and Robert were born until an opportunity arose in Tisdale for Dad to buy a general insurance agency. Life in Tisdale saw the birth of daughter Valerie and son John, as well as establishing Hodgins Agencies. Dad was elected to a term on town council followed by a term as Mayor. Life in small-town Saskatchewan was good and included an active role in the Anglican church, Chamber of Commerce, and lifelong friends.
In 1973, Dad made the bold move of leaving his beloved Saskatchewan and found new business opportunities in Claresholm, AB with the purchase of another insurance agency. He and mum remained in Claresholm until retirement in 1987 when they moved closer to Valerie’s family in Lethbridge. Dad and Mum enjoyed retired life in Lethbridge as well as many happy winters in Mesa, AZ which afforded them to reconnect with old friends from Tisdale. In 2012, Dad accepted Valerie’s invitation to live with her family. That proved to be a lovely arrangement with the help of two very important ladies, Chona Quilog and Vivian Ebueza, who provided living support to Dad allowing him to live out his elder years surrounded by the love of his family. It was a wonderful place for all of Dad’s children and grandchildren to visit. A fond memory for all of us was Dad’s favourite goodbye, “Carry on; God Bless”.
A memorial service will be held Feb. 9 at 1 pm at Saint Augustine’s Anglican Church, 411- 11 Street South, Lethbridge. Interment will follow at Mountain View Cemetery.