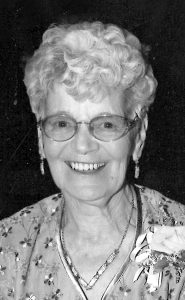 Mrs. Alfreda “Freda” Allsop of Lethbridge passed away in Black Diamond on Tuesday, February 12, 2019 at the age of 94 years. Alfreda was born December 5, 1924, in Lethbridge. She is the sixth child of father Theodore “Ted” Erno and mother May Hewitt. Freda was proud to have lived her entire life in Lethbridge. She took commercial subjects in High School, which led to her employment in the Department of Transport and Lethbridge Building Supplies. Freda is survived by her three daughters Rhonda (Randy) Sorgard of Cobble Hill, BC, Darla Hughes of Lethbridge, AB and Terri (Russ) Paton of Millarville, AB; her dear sister-in-law Flossie Erno; along with eight grandchildren, five great grandchildren and several step children and their families. Freda was the last of her siblings to pass and was predeceased by her first husband, Charles H Shepherd and her second husband, Albert E Allsop. A Funeral Service will be held at 1:00pm, on Saturday February 16, 2019, at FIRST BAPTIST CHURCH, 1614 5 Avenue South, Lethbridge, AB T1J 0W3, with Dr. Bruce Martin officiating.