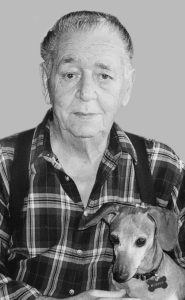 ROBERT “BOB” OSCAR PETERSON, beloved husband of Mardell Peterson, of Coutts, passed away peacefully surrounded by family at the Chinook Regional Hospital, on Monday, February 11, 2019 at the age of 79 years.

He is predeceased by his parents Simone and Foster Peterson and in-laws Ivan and Florence Livingston.

Bob was born on November 6, 1939 in Lethbridge, Alberta. He moved to Coutts, Alberta in 1954. Bob married Mardell Livingston in 1958 and they resided in Coutts until his passing.

Bob had many careers in his lifetime including owning a barbershop and the Hillview Café and Village Pub. Later in his life, Bob purchased a semi-truck and spent a few years on the road.

Bob supported his community. He was a member of the Coutts Fire Department for 30 years. He also served as councilor and mayor.

Bob was always up for a new challenge. He could renovate, build, manufacture, or fix anything. One of Bob’s greatest pleasures was watching his grandchildren participate in sports.

In his retirement, Bob enjoyed travelling with family and friends.

In lieu of flowers, donations can be made to Coutts Fire and Rescue, Box 277, Coutts, AB, T0K 0N0