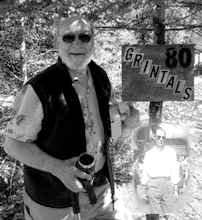 Guntars Jekabs Grintals of Lethbridge, beloved husband of Betty Grintals, passed away at Chinook Regional Hospital on Friday, February 15th, at the age of 84 years, after living a life of compassion, courage, strength, dignity and determination. Thoughtful and kind as always, Guntars ensured he was around to spend one last Valentine’s Day with his lifelong sweetie, Betty. The child of Jekabs and Alise Grintals, Guntars was born in Tukums, Latvia on September 14, 1934, spending the first 10 years of his life at the family farm. In 1944, Guntars and his parents were forced to flee the farm as the Russians were invading Latvia. He and his parents spent 4 years in a German displaced persons camp, where Guntars learned English from an English professor also interned there. In 1948, the family boarded the ship Aquitania, bound for Canada. At the age of 14, Guntars served as the translator on the ship, between crew and passengers. His parents and he arrived at Pier 21 in Halifax, Nova Scotia on February 13th. They settled in Lachine, Quebec. His parents eventually purchased two pieces of land along the River Rouge, in an area called Tervette, where Guntars and his father built a summer cottage and art studio. It was here, and through his parents, that Guntars developed his love of gardening. Tervette was a place that Guntars loved always, and later in life his wife and children came to love the area as well. In his teens and early adulthood, Guntars was active in sports, the arts, outdoor pursuits, Boy Scouts, Rover Scouts, Sea Scouts and acting. He also looked smashingly cool and suave in a Zoot suit and was a bit of a chick magnet. He attended Concordia University where he majored in English Literature, receiving a Bachelor of Arts Degree. He began working at the Girls Cottage School outside of St-Bruno, Quebec in 1960, as a teacher for at risk adolescent girls, and it was there that his heart was captured by Nurse Betty. He was besotted by her beauty, intelligence, and sass and there was no way she could resist his handsome stylishness and gentle, charming ways. This match made in heaven were married on August 12, 1961 and headed out west with the goals of starting a family and working to make the world a better place. After several moves around the province of Alberta, and one brief relocation back to Quebec in between, Guntars and Betty landed in Lethbridge, having acquired 3 noisy children, a few dogs, and his Bachelor’s Degree in Social Work from the University of Calgary. Guntars’ career in Social Services spanned 32 years in different positions including Unit Supervisor in Lethbridge and Regional Manager in Coaldale. He was highly respected by his colleagues for his compassion, sense of fairness, intelligence and weird sense of humor. He was wholly respected by his children for just generally putting up with our hair-raising antics. An unbelievable mutlti-tasker, he also instilled within us the values of compassion, caring, community service, hard work, open-mindedness, love of animals and nature, higher education and equality for all. And of course the genetic predisposition to weird humor. Guntars was passionate about gardening, reading, astronomy and the outdoors. He and Betty also purchased a cabin at Grave Lake, BC where they spent much of their free time canoeing, fishing, exploring and ditching their two eldest children. In retirement, Guntars swung the occasional golf club and grandchild as well as spent time watering the grass and tending to the flower gardens Betty and he loved. He was also an avid stamp collector. Very avid….as in boxes, and boxes, and boxes of stamps. Probably even more boxes. Heavy boxes. Lots of boxes. On December 19th, 1997, Guntars and Betty were pre-deceased by their son, Curtis Grintals, a loss that forever added sadness to their lives. On November 25th, 1998, Guntars had a partial amputation of his left leg. With his usual dignity, determination and strength, he carried on steadfastly, refusing to let it slow him down. This led to more travel for Nurse Betty and him, including a cross country road trip, a European river cruise with a return to Latvia, and a 50th Anniversary love stop in Cuba. Occasionally, the two love birds would also venture to the West Coast, trying to convince their wayward middle kid to get her butt back home. In December of 2016, Guntars was diagnosed with an incurable rare form of cancerous soft tissue sarcoma. Again, he carried forward and pushed on, ensuring that those he loved would be taken care of as best as possible. On February 15th, 2019, Guntars passed quickly. The gentle giant, the wise old oak of the forest, was downed from all the forces he had stood so strong and tall against, for so long. He is survived by his beloved wife Betty Grintals, his two daughters Lisa McLellan and Erika Grintals, and his three grandchildren, Keegan McCartney, Braden Allred and Gage Dodds. We weep for your loss dad, and our hearts are heavy. Generous in nature, kind and fair, you have always been the model of what it means to be a good person. A genuinely nice person. Thank you for all you have taught us, all you have given to us, and the planet, during your time spent here. The world will not be a better place without you. Say hello to Curtis and send him our love. A Celebration of Guntars’ Life will be held at 10:00am on Saturday, February 23, 2019 at MARTIN BROTHERS RIVERVIEW CHAPEL, 610 – 4 Street South, Lethbridge, Alberta. Flowers are gratefully declined. For those who wish, memorial donations may be made to The War Amps https://waramps.ca/home/.