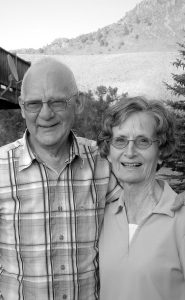 BYRON ALFRED SHURTZ of Raymond, beloved husband of Nola (Orr) Shurtz, after a struggle with illness passed away peacefully, on Wednesday February 20th, at the age of 85 years. He was born February 26, 1933 in Calgary, then adopted by Rudolph and Maud (Romeril) Shurtz and raised in Lethbridge with his adopted siblings. He met Nola, who he affectionately called “Mike,” and they married in October 1952 in Lethbridge. They were later sealed in the Cardston temple. A short time later he served a mission for The Church of Jesus Christ of Latter-day Saints in Eastern Canada. Nola stayed home in Lethbridge and supported him by working as a telephone operator. After his mission in 1956 they started their family, and he began working as a ballroom dance instructor simply as a means to provide for his family; however, it didn’t take long for him to discover an amazing gift for dancing and he was soon winning international awards. In addition to owning a dance studio, he also hosted a weekly dance program on local television called “Bop ‘n’ Talk.” There are literally thousands of men and women across Western Canada today who can credit their ability to waltz, jive and foxtrot, to Byron and Nola Shurtz. When he retired from dancing, Byron worked many years for Mo-Tires in Lethbridge and then worked for himself selling Nutcracker lubricant until he retired several years ago, leaving the business to his sons. He adored his family and loved spending time with them, playing games and just visiting, and he was an amazing example of Christ-like, unconditional love. His testimony of the Gospel was unshakable. He had a great sense of humor and the simplest things made him laugh. He also loved music and won awards singing duets with his sister, Coral, and he sang barbershop with his sons and a friend, who called themselves “Three Shurtz and a Sock.” He loved American politics and was an artist and carpenter. During his final days at the Raymond Care Centre he was upbeat and positive, and we are beyond grateful for all the caregivers who so lovingly attended to him like he was their own father! Byron is survived by his wife Nola (Orr), daughter Terry (Craig Clifton), sons Delon (Sue West), and Dan (Connie Oranchuk), brother Royden (Alene), sister Coral (Doug Terry), 18 grandchildren and 31 great grandchildren. Byron was predeceased by, and now reunited with, his son Barry, daughter Kim, his parents Rudolph and Maud, his sister Madeline and brother Don.