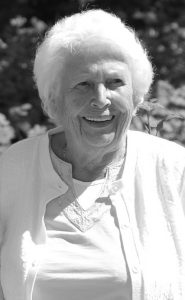 DOREEN “NAN” PAUL (nee Stevens) was born in Cardiff, Wales on July 26, 1925 and passed away surrounded by her family on March 4, 2019 in Cardston, Alberta. She was 93 years old.Nan is survived by her children; Gwyn Paul of Port Elgin, Ontario; Jean (Jeff) VandenHoek of Cardston, Alberta; Robert Paul of Kingston, Ontario; James (Shelley) Paul of Baden, Switzerland; and, Honorary Daughter Mary-Margaret (John) Miller of Dorset, England. She is also survived by her Grandchildren Ian (Kerri) Paul; Jason (Kurt Schlachter), Justin (Stephanie) and Jordan (Tammy) VandenHoek; Veryan (Ben) Burrows; and, Megan (Mike Lessard) and Rebecca (Aaron Cameron) Paul as well as 14 great grandchildren and 1 great, great grandchild. Nan was preceded by Grandson Robin Paul (Samantha), Sister Edna Griffiths; Brothers Victor and Jim Stevens; and, Parents Robert (Bob) and Florence (Flo) Stevens. Nan grew up on 61 Angus Street, Roath Park, Cardiff Wales during the height of World War II. During the war she served as a “Land Rover Girl” working on farms while the men were away. She also supported the war effort as a nurse and a parachute packer. She married in 1947 and Gwyn, Jean, Robert and James were born. In 1967 she immigrated to Canada settling in the Caledon, Ontario area. With her family she operated “Erin’s Fish and Chips” for many years until relocating to Cheltenham, Ontario. Nan loved life in Cheltenham and served as Post Mistress for Canada Post and kept an eye on the goings on of the Village from her front porch. She had the opportunity to travel extensively including many trips back to England and Wales, to Alberta to visit her daughter and to visit her son Gwyn in Zambia. She lived for a short time in Port Elgin, Ontario, buying a house boat (much to her children’s chagrin – she couldn’t even swim!) then in Acton, Ontario with James and Shelley, where she lived a life of leisure, poolside in her “bathing costume”. She then set off on a new adventure – moving to Alberta to live with Jean and Jeff. She quickly adapted to life on the Bar K2 Ranch, supervising the cowboys from the living room window, often feeling compelled to provide her input on what she thought they should be doing and how quickly she thought they should be doing it. Nan was always the life of the party! There was nothing she liked better than to be surrounded by her friends and family – she considered everyone she met to be a part of her family, insisting they call her Nan, even though her son in-law preferred to call her the “Old Dragon”. Her grandchildren learned early on how to properly mix a rye and water, being careful not to “drown it”, and they all knew to jump to attention if she was shaking an empty glass in their direction. Nan’s family would like to thank the staff at Lee Crest Assisted Living, especially those on the 2nd floor who treated her so well; Barb Nish for making sure Nan always looked her best; and, Dr. Taylor and the staff of the Cardston Clinic and Cardston Health Centre for their exceptional care. At Nan’s request there will be no formal service. A private celebration of life will held this summer. Nan would like nothing more than for you to raise a glass in her name, preferably a good rye, but please don’t drown it!