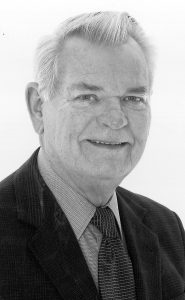 Gerrit “Garry” Houthuys of Lethbridge, beloved husband of Jo-Ann Houthuys passed away after a short illness on Tuesday, March 12, 2019, at the age of 78. Garry was born in Amsterdam, Holland. In April of 1953 he immigrated to Canada with his parents and 6 siblings, landing in Halifax after 10 days at sea. They stayed with an aunt & uncle in Cornwall, ON before moving to Toronto. In 1958 he started working for Kawneer. It was Garry’s goal for Canada’s centennial in 1967 to become a Canadian citizen, which he did with pride. Garry met and married Jo-Ann in 1974 and welcomed his son Andrew into his life in 1979. 1983 brought a transfer for Garry so he & his family moved to Lethbridge. Garry retired from Kawneer in 1993 and filled his time using his woodworking skills and playing some golf. He has volunteered with the Hockey Hounds for many years as well as delivering Meals on Wheels. Garry was a hardworking man, who loved working in his garage building cabinets, shelving etc.. He liked to travel and enjoyed the beauties of nature and classical music GONE BUT FOREVER IN OUR HEARTS. Garry is survived by his son Andrew (Laura); sister Nellie (Bob) Austin; brother Willy and brother Henry (Mary) Garry was predeceased by his parents Peter and Katharina; brothers Rudolph and Corrie and sister Rita. A Memorial Service will be held at 2:00PM, on Wednesday, March 20, 2019, at the PARK MEADOWS BAPTIST CHURCH, 2011 15 Avenue North, Lethbridge, AB T1H 5J4. Flowers are gratefully declined. For those who wish, memorial donations may be made to Chinook Regional Hospital 960 19 Street South Lethbridge, AB T1J 1W5 or St. Michael’s Health Centre, Palliative Care, 1400 9 Avenue South, Lethbridge AB T1J 1V5.