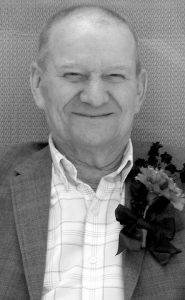 Joe Sokac passed away March 12, 2019 at 93 years of age. He leaves to cherish his memory, his wife of 70 years Eva; his daughter Anna, son-in-law Ken, grandkids Shane, Andy and Dallas, great grandkids Tanisha, Andrew and Matthew. Joe, a man who was always proud of his Croatian heritage, was born on February 8th, 1926 in Sonta, Backa in the former Yugoslavia. He was a quiet serious young man who became a tailor by trade. In 1948 he married the love of his life Eva. Wanting a better future for his family, he immigrated to Canada in 1957. They settled in the Readymade area where he worked the sugar beet fields. A few years of hard work earned him his own little farm in Enchant where he raised cattle and had his own sugar beet field. He loved his cattle and was often seen petting them as he walked around the coral. He cultivated roses and grapes and loved his fruit trees. He would graft 5 different apples on one tree and they would all ripen at different times and be different colors and sizes! He could be seen puttering around always working on something or peeled to the TV watching soccer games from around the world. He loved his music – the louder the better and had a wicked sense of humour. He believed in helping his friends and neighbors, building or renovating their homes, farming or fixing farm equipment. All he accepted as payment was a handshake. He loved his grandkids, but he was never a talker and yet both grandkids will never forget their grandpa. First and foremost, he’d reach into his pocket and hand over a fistful of change to each child who was ecstatic! That tradition has now been handed down to his son-in-law Ken who does the same thing for his grandkids. By 1975 they could no longer physically work the farm and ended up buying 10 acres on the outskirts of Taber where they lived and worked at the sugar factory and later at the Dr Hamman School as caretakers. They had many friends in Taber but once again came a time when they could not keep up with the work to maintain their little acreage and they moved to Lethbridge in 2003. They lived in the friendly Tudor Estates area where neighbors became great friends. They enjoyed their time there until dad ended up in a wheelchair and had to go into Edith Cavell Nursing Home where he resided until his passing. He received excellent care there and we heard many times how loved he was by his nurses, caregivers and staff. He never complained and they all called him “Smiling Joe.” We are forever grateful for all who looked after him at Edith Cavell. They treated him and us with great care, kindness and concern. We will dearly miss Joe the husband, the father, the grandfather, the great grandfather, the friend. No one will ever forget his smile…it was always the first thing you saw. We love you and you have a forever home in our hearts. A Prayer Service will be held at 7:00pm, on Monday, March 18, 2019 at MARTIN BROTHERS RIVERVIEW CHAPEL, 610, 4 Street South, Lethbridge, AB. A Funeral Mass will be held at 10:00am, on Tuesday, March 19, 2019 at OUR LADY OF THE ASSUMPTION ROMAN CATHOLIC CHURCH, 2405, 12 Avenue South, Lethbridge, AB., with Father Albert Sayson, as celebrant. Flowers are gratefully declined. Those who wish may make a memorial donation to the Alzheimer Society of Lethbridge, #40, 1202 2 Avenue South, Lethbridge, AB.