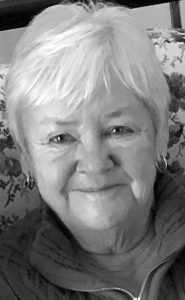 Mrs. Bonnie Walcheske of Lethbridge, beloved wife of the late Gordon Walcheske, passed away on Tuesday, March 12, 2019 at the age of 67 years. Bonnie was born in Claresholm, Alberta, on September 27, 1951. She met her husband Gordon in Ponoka and were married in 1969. Shortly after they started their family of three children. Bonnie enjoyed crafts, cooking, camping, and had a very special passion for having fun with family and friends. She always took great pride in hosting special occasions and gave her full commitment to her family and friends. Bonnie and Gordon developed many lifelong friendships through the many places they lived. She worked several years at the Medical Clinic and later was Gordon’s right hand in their own business on their acreage. She gave all of herself to her family. Her generous heart and thoughtfulness brightened the days of everyone she met. She will be dearly missed by everyone she knew. Bonnie is survived by her two daughters Jackie Sokownin (Dennis) and Joleen Semach (Rick); one son Jason Walcheske (Teena); grandchildren Jillian Stephens (Dylan), Amber Sheppard (Mack), Riley Sokownin, Raiden Semach, Talon Semach, Ronin Walcheske, and Colter Walcheske; great grandchild Evie Stephens; sister Barbara Rilling and brother Greg Bell, as well as numerous nieces, nephews and their families. Family and friends are invited to pay their respects between 12:00PM and 1:00PM, on Tuesday, March 19, 2019, at the PARK MEADOWS BAPTIST CHURCH, 2011 15 Avenue North, Lethbridge, AB T1H 5J4. A Funeral Service will be held at 1:00PM, on Tuesday, March 19, 2019, at the PARK MEADOWS BAPTIST CHURCH, 2011 15 Avenue North, Lethbridge, AB T1H 5J4, with Pastor Lorne Willms officiating.