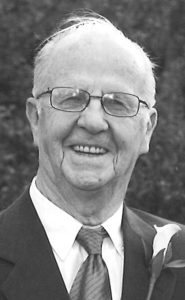 Augustinus Brouwers of Lethbridge, beloved husband of Maria Brouwers passed away peacefully on March 17, 2019 at the age of 89.

Augustinus better known as “Gus” was born February 9, 1930 in The Hauge, Netherlands to Florentinus and Maria Brouwers. Gus was educated in Holland and at the age of 19, joined the army and fought in Indonesia. In May 1952, Gus emigrated to Canada and worked for the PFRA in Vauxhall. Maria Meijer joined Gus in December and they were married in Taber. Gus continued to work for the PFRA in Alberta and Saskatchewan, before retiring in 1987 to Lethbridge. Retirement never slowed Gus down, and he could often be found tinkering with his model trains, making wine, or lending a hand to family, friends and neighbors. Gus or also known to many as “Opa” loved his family and spent tireless hours woodworking and building things for others until he was no longer able. Opa will be greatly missed by his family, friends and everyone that ever had the pleasure of sharing a story with him.

Gus was predeceased by his parents Florentinus and Maria Brouwers; brothers Wilhelm, Hank, Max, Peter and sisters, Joann and Marie.

For those who wish, memorial donations may be made to the Alberta Cancer Foundation, 1A129, 960-19 Street South, Lethbridge, Alberta, T1J 1W5.