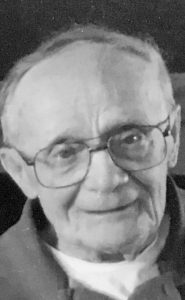 Mr. Peter Turnbull of Lethbridge, beloved husband of the late Mrs. Mavis Turnbull, passed away on Monday, March 11, 2019 at the age of 93 years. Peter was born on September 1925 in Brechin, Ontario and married Marvis on May of 1955. He was one of the owners and refrigeration mechanics at Lethbridge Refrigeration. After retiring he worked at the Lethbridge Jail. Peter enjoyed his golf and curling. Peter was predeceased by his parents Ethel and William Turnbull along with his brothers and sisters. Peter is survived by his daughter Kelley (Dan) Sorer; 2 sons Russell (Jo-Anne) Turnbull and James Turnbull; his grandchildren Joshua and Lukas Sorer and Makena and Kaija Turnbull and (Jo-Anne’s children Laura Hughes, Crystal Furlong and Katie Coburn); as well as numerous nieces, nephews and their families. A Funeral Service will be held at 2:00PM, on Saturday, April 6, 2019, at MARTIN BROTHERS RIVERVIEW CHAPEL, 610 4 Street South, Lethbridge, Alberta. A Celebration of Peter’s life will be held following the Funeral Service at 3:30PM, at the LOYAL ORDER OF MOOSE, 1401 5 Avenue North, Lethbridge, Alberta. Flowers are gratefully declined. For those who wish, memorial donations may be made to the ALS Society of Alberta, 7874 10 Street NE, Calgary, AB T2E 8W1 or the MS Society of Canada, 724 13 St N, Lethbridge, AB T1H 2T1.