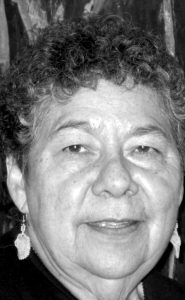 Clotilda was born to Frank and Kate Many Fingers on May 13, 1938 at the Blood Indian Hospital. She is the eldest sibling of nine children. She grew up with three sisters and five brothers. Clotilda was raised on the Blood Reserve attending schools at St. Mary’s Residential School and Roman Catholic Convents at Pincher Creek and Medicine Hat, along with her younger sister Virginia. At a young age Clotilda suffered a serious ailment of appendicitis, where she was unable to attend school for one year. While at home Clotilda learned to sew, which later became a lifelong endeavor. Clotilda was raised in a cowboy and ranch setting, as her father Frank was a well recognized all round champion cowboy. Along with her siblings, she learned to handle many chores on the ranch and would travel with her parents to numerous rodeos. Clotilda developed a hard work ethic which carried on throughout her life. Many of her family and life long friends will remember her kind and compassionate nature.

On October 31, 1959 Clotilda married her life long partner Louis Winston Soup and they were blessed with three sons–Ricky, Renny and Todd. In the early 60’s, Louis and Clotilda along with Ricky moved to Vancouver B.C. where Louis attended Carpentry training and Clotilda attended Nursing Aid training. The young family lived and worked in Vancouver for a few years along with Louis’s mother Julia, Papa Jake, and siblings. In the mid 60’s they moved back home to Alberta and raised their growing family, living and working in Calgary for a period, then back home on the Blood Reserve.

Clotilda was a person of many talents and abilities. During her professional career she worked in various capacities in the Health Field as a Nursing Aid in Cardston, a Director of Social Services on the Blood Reserve, and Director of the Detox Centre in Fort Macleod. She was also an entrepreneur, being a seamstress, and owner of the Standoff laundromat. Prior to her retirement at age 70, Clotilda returned to the Health Field in Cardston as a Nursing Aid and a Home Care Worker for the Blood Tribe Health Department. In her spare time Clotilda was an avid bingo player.

Clotilda was a huge supporter of her husband Louis, and sons, Ricky, Renny and Todd’s sports activities. As a loving mother, she always ensured her boys were well fed and clothed, sewing many of their school outfits. Clotilda was very proud of her family’s many accomplishments, always ensuring good school attendance—as education was priority number one. As a grandmother, Clotilda was very proud and loving to her many grandchildren. She would travel with them to many events, such as hockey tournaments, graduations, family dinners–always letting them know how precious they all were to her. Clotilda was so very proud of her late son, Renny who joined the powwow trail as a traditional dancer. She would often accompany him and his family to many powwows. Clotilda participated in numerous traditional activities, including sweats and ceremonies. She was proud of her culture and language, enjoying many visits with family and friends as a fluent Blackfoot speaker.

Clotilda was very independent and resilient throughout her life. She was a cancer survivor, having been diagnosed with breast cancer in the 1970’s and living through the spectre of this disease for the rest of her years. In the 90’s Clotilda was in a serious car accident. She sustained significant injuries, which effected the use of her left arm. She eventually lost usage of the arm, but still managed to live a very active lifestyle until her residence at Kainai Continuing Care Centre. The family is eternally grateful for all those who attended to her care until her passing.

A Family Service will be held at Legacy Funeral Home on Monday, April 8th from 5:00-6:00 p.m. followed by the Wake Service at the Senator Gladstone Hall, Blood Reserve from 7:00 – 11:00 p.m. The Funeral Mass will be held at St. Mary’s Catholic Church,Blood Reserve on Tuesday, April 9th at 11:00 a.m. Interment in St. Paul’s Cemetery.