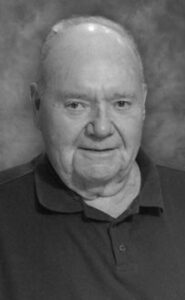 WILLIAM K. “BILL” GEJDOS of Lethbridge, beloved husband of Elnore Gejdos, passed away on Friday, September 11, 2020, at the age of 85 years.

Bill was born on the family farm on December 25, 1934 and attended school in Skiff, Lethbridge, and Foremost. He married Elnore on October 18, 1954, and by 1956 they had taken over the family farm with the assistance of hired help until their sons were old enough to farm with them.

After Bill had a stroke, his sons Gordon and Kevin took over the farming operations. When Kevin moved away to raise his family, grandson Blair joined Gord in operating the family farm.

Bill is survived by his beloved wife Elnore of 65 years and their three sons; Ken (Cathy) their children Cody and Ashley, Gordon (Sandra) their children Blair and Kayla (Justin) Schooten, great-grandchildren Rhett & Ivy, Kevin and his children Dylan (Sadie Mennie) and Brooklyn (Steve Clarke). He is also survived by his sister Mary Peterson, sister-in-law and brother-in-law Lil & Cec Hiscock, as well as numerous nieces, nephews, and cousins.

Bill was very generous with his time and energy over the years, volunteering in his community in numerous ways. He was a member of the Skiff Board of Trade, served the County of Forty Mile #8 for 35 years, and was on the Municipal Committee for 34 years. He was a Director of the Foremost Co-operator Seed Plant, and Chairman of the Agricultural Service Board for 25 years. Bill served one year on School Committee, was a Director of the Foothills Little Bow Association, and was on the Bow Island Hospital Board.

Bill was a Chartered Member of the Foremost Knights of Columbus and in 1996 he transferred to the Lethbridge Council #5726, serving on the Church Parish Council for a few of those years. He was involved with the Foremost Elks Club, managed the Skiff Cardinals Baseball Team until they ran out of players, and later played with Sherbourne and Lucky Strike. He supported minor hockey in Foremost and was a referee for 20 years.

In addition to his community work, Bill enjoyed baseball (rarely missing a Blue Jays game), hockey, basketball, curling, hunting, and fishing. He enjoyed spending time with his grandchildren and traveled many miles watching his grandsons play hockey and rugby and his granddaughters figure skate, play basketball, volleyball, and hockey.

He and Elnore enjoyed many vacations together including; cruises to the Mediterranean, Alaska, and the Panama Canal, a trip to Disneyland, Expo ’86 in Vancouver, and many Fourth of July celebrations in the United States.

Because of COVID 19, a private service will be held at Cornerstone Funeral Home. Bill will be laid to rest in Mountain View Cemetery.

In lieu of flowers donations can be made to the Heart and Stroke Foundation of Canada, #110 – 1525 Carling Avenue, Ottawa, ON K1Z 8R9, or to HALO Air Ambulance, #12 – 49 Viscount Avenue SW, Medicine Hat, AB T1A 5G4. Both charities can also accept donations via their websites. By Bill