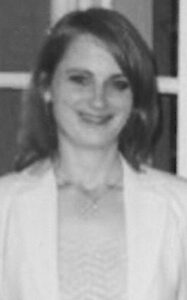 Early on the morning of September 21, 2020 our beloved daughter, sister, and aunt, Ravona Colleen Mason (Leenie) stepped into eternity. She was our special redhead: she had a fiery spirit, a stubborn streak, and a tender, loyal heart. From the time she was a teenager, she had a passion for politics and social justice. She was a saver and a hard worker beginning in University when she would study by candlelight in order to save money on electricity.

After graduation from the University of Lethbridge, she attended Carleton University in Ottawa for her graduate studies in Political Theory. It was in Ottawa that her career began in the Office of the Official Opposition as a writer in Communications. Much to our amusement, it was in the “spin shop” that she was dubbed a “Hottie” by Frank Magazine. Those of us who knew our Leenie best knew that the “title” applied as much to her personality as to her appearance. During the course of her career with the Conservative Party, the Canadian Bankers Association, and Fleishman Hillard, she had over twenty years’ experience developing and executing communications strategies for government, energy resources, transportation and the technology sector. She devoted the last years of her career to managing political strategies and campaigns for the Conservative Party at both the Federal and Provincial levels.

Colleen leaves a host of those who loved her: father, Raymond Mason; mother and stepfather, Gretchen and Peter (Papa) Scott; sister and brother-in-law Kimberly Gillespie and Jason Mercer; brother Erik Mason (Rachel); seven nieces and nephews as well as many friends and colleagues.

A Funeral Service will be held at 1:00 p.m. on Thursday, October 1, 2020 at MARTIN BROTHERS RIVERVIEW CHAPEL, 610 4 Street South, Lethbridge, Alberta with Pastor Gerald Spoor of Vernon officiating. For those who wish to watch the service via livestream, please visit www.mbfunerals.com.

Due to the Covid health restriction in place, the family asks that those desiring to share in the celebration of Colleen’s life RSVP to gretchen.scott@uleth.ca. Flowers are gratefully declined; however, those who wish may make memorial donations to either the Conservative Party of Canada #14, 900 Village Ln Suite 305, Okotoks, AB T1S 1Z6, or the S.P.C.A., 4455 110 Ave SE, Calgary, AB T2C 2T7.