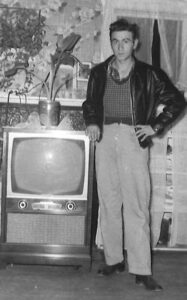 My father Josef Kern was born on June 11, 1934 in a small town called Vaschka in Yugoslavia. It was a German community. His parents Anton and Anna and three siblings, oldest sister Theresa then Mary and brother Tony. According to my father, he had fond memories of a beautiful home and land that provided for them with cattle and other livestock along with a vineyard. But at the age of 8 years, they were forced from their home because of the war. settled in Linz, Austria. They spent 12 years living in Barracks. Then in 1956 they took an opportunity to move to Magrath, Alberta in Canada. He and his parents moved in with his brother Tony and sister-in-law Katie. He worked hard and met his love Antonietta Iafrancesco who came from Italy in 1958. They were married in 1962 and had their first son Mike in 1966 and son Robert in 1969. Dad was a terrific father who loved his family and friends. He worked hard at CPR and SRI homes where he retired at the age of 62 years. His beloved wife passed away at the age of 73 sadly in 2003 and he missed her terribly.

He had a big heart and always helped his family. Tragically he suffered a stroke at the age of 79 in 2013. He then resided at a Seniors Home with assisted living. As a family we made the best of the situation and always visited dad only trying to love and laugh as often as we could. He was happy.

His son Robert and wife Tarah acquired his home. Unfortunately, Rob’s life was taken tragically in 2016 in a motorcycle accident. No parent wants to out live their children. We all endured as a family and loved dad until his struggle came to a peaceful end in the early morning hours of Friday, October 2, 2020.

“Family” was important to my father, he taught us how to live, laugh and love and focus on the day to day.

Rest in peace dear father, we will always remember you as a strong loving man. “God Bless” you, join your place with mom and Robert now.

Josef will be laid to rest in a private family ceremony beside his darling wife Antonietta in the Mountain View Cemetery.

For those who wish, memorial donations in Josef’s name may be made to the Heart and Stroke Foundation of Alberta Box 2211 Lethbridge, Alberta T1J 4K7.