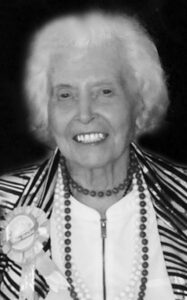 Joyce Owen, passed away peacefully on October 2, 2020. Joyce was born on February 23, 1921 in Lethbridge to Scott and Anne Davis

She was predeceased by her husband Elwyn “Jim” Owen; son Roger; parents Scott and Anne David and brother Russell Davis.

She attended school in Coaldale and then the Galt School of nursing in Lethbridge and graduated in 1944. Later that year she married Elwyn “Jim” Owen and moved to the family farm north east of Coaldale. She enjoyed farm life and where they raised their family. In later years they travelled many winters to Arizona, after Jim passed away she continued to travel there. She loved time with friends and family and was always up for a game of cards!

A Private funeral service will be held at 10:00 a.m., on Saturday, October 10, 2020, at MARTIN BROTHERS RIVERVIEW CHAPEL, 610 4 Street South, Lethbridge, Alberta. The family invites you to watch the service via livestream on the Martin Brothers website.

Flowers are gratefully declined. For those who wish, memorial donations can be made to GARD (Grassroots Assistance In Rural Development); www.canadahelps.org or mailed to 35832 Heatherstone Place, Abbotsford, BC V3G 1E6, or a charity of your choice.