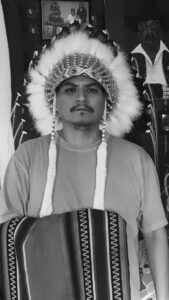 JIM LEE WHITE MAN LEFT, beloved husband of Tobi White Man Left, of Lethbridge, passed peacefully away at the Chinook Regional Hospital surrounded by family, on Wednesday, October 21, 2020 at the age of 39 years.

At the age of three, Jim’s parents joined the Horn Society. It was then that Jim learned the importance of respect and prayer. Jim formed a very special bond with the new member of the family, the Bundle. He spent countless hours in mom and dad’s room visiting with the Bundle. They must have had some good conversation as you can hear Jim talking and laughing from the other room. The bond they shared was unbreakable.

When it came time for the bundle to go with his new parents Jim was very lonely. At the age of 17, Jims Auntie/Mama Natalie and Gordon joined the Horn Society. He proudly accepted the opportunity to help Natalie and Gordon at the Sundance every year. This opportunity encouraged him to join the Horn Society at the age of 21. His thirst for knowledge and experience brought him deep into the life of spirituality. At a very young age Jim gained so much experience as a Horn Society Member, his knowledge was greater than anyone expected. Mom would say Jim went further in this life than his parents. Mom would call on Jim for answers when she didn’t have them. Jim was the baby of the family, but when he joined the Horn Society he became the patriarch of the family. Jim was always just a phone call away when his family and friends need prayers or brothers needed a hand building a sweat.

It was very rare that Jim would say no, but it would be only because he had other spiritual commitments to attend. During his time in the Horn Society he joined the Brave Dog Society a transfer he got from his sister Michelle. He had the opportunity to carry the rattle that Dad and his cousin Bernice carried. He proudly carried that role as well and gained even more knowledge. At a very young age Jim was a role model for his family. He wanted everyone to experience what he had experienced. He transferred the rattle to big brother Kendall and Daughter Katelyn. He was so proud to take this role on. You can see the happiness and was proud when family followed suit. Jim was extremely proud of his big brother Garrett and sister Tara when they took the lead role in the Mourning Dove Society. Even more proud at his boys Blake, Quincy, baby Joe, nieces Deidre and Cecile and cousins for becoming members as well. Jim had a great sense of humour and an infectious smile and laugh. It made him happy when his family all came together at the big camp (Sundance) every year. When Jim transferred out of the Horn Society he became an elder for the Mourning Dove Society a role that he took very serious and enjoyed. Jim encouraged big sister Cheryl and brother-in-law Lewis to live this life as well. He was so happy when he found out they had accepted and was with them every step of the way encouraging them sharing knowledge and guiding them.

Jim left some big mocc’s to fill and is a huge loss to family, friends and spiritual family. As a Horn Society Member Jim was not done learning as he then accepted a role along with Joe and Christy Day Chief as a Thunder Pipe Holder. This role gave him more knowledge in his life of ceremony and prayer. Jim was also a carrier of a Buffalo Rock that was transferred to him by his spiritual father Godfrey Red Crow. Jim’s spiritual father transferred a head dress to Jim and of course never left his children behind as his nephew/son Blake Black Forehead also received one at the age of five. Mom Florine always reminded him of all his spiritual achievements. Jim was never one to boast or wear his spiritual life. Jim was truly a humble person.

Jim worked with Blood Tribe Recreation as Maintenance, Kainai Children Services as a mentor for Kainai Youth Council and a teacher’s assistant at Saipoyi and Middle School. This is where he gained experience with special needs children, a role that he loved. He worked with the Ag Society at the Agriplex, Blood Band Ranch. His current job was with Kevin and Doug Many Grey Horses as a labourer.

Jim volunteered his time with youth, coaching baseball and hockey. You often saw Jim at the Sundance with young boys, encouraging them, offering spiritual guidance, teaching our way of life and having them attend sweats.

His hobbies include golfing with his beloved wife Tobi and sister Michelle, hiking, hanging out with all his kids, taking walks, sliding, swimming, camping, working out, and hunting with his brother Kendall. His favourite past-time was visiting with elders.

A Funeral Service will be held at the Florine White Man Left’s Residence, on Friday, October 30, 2020 at 11:00 A.M. with Martin Eagle Child officiating.

Following the service, Jim will be eternally laid to rest in St. Catherine’s Cemetery.