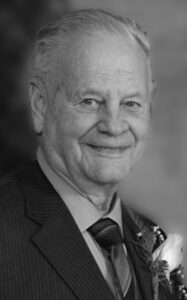 Bernard Odland of Lethbridge beloved husband of Hanna passed away peacefully on October 27, 2020, at the age of 88 years.

Bernard was born in Enchant on April 17, 1932, eldest of Torvold and Maria’s three children. He attended Enchant school and starting farming with his father at a young age. Farming was always his labor of love.

He married Hanna Pederson, the love of his life, on November 4, 1961 and they had 2 sons, Terry and Jim. When not farming he particularly enjoyed watching his boys play sports and then in later years his grandchildren. After retirement they moved to Lethbridge where he resided until his passing.

Bernard and Hanna enjoyed many trips and holidays with their children and grandchildren. Spending time with his family was his greatest joy. He was a kind, humble, thoughtful, helpful and very dedicated family man.

Bernard was predeceased by his brother-in-law Arnold Skretting and nephew Selmar Skretting.

A private Funeral Service will be held at 11:00 a.m., on Saturday, October 31, 2020, at MARTIN BROTHERS RIVERVIEW CHAPEL, 610-4 Street South, Lethbridge, Alberta. The family invites you to watch the service via livestream by clicking on Bernard’s obituary on the Martin Brothers Website https://www.mbfunerals.com/.

Flowers are gratefully declined. For those who wish, memorial donations may be made to the charity of your choice.

One Condolence for “ODLAND, Bernard”