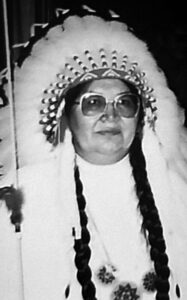 Viola Joyce (Weasel Moccasin) Old Shoes (Ooh’ta’kakii) passed away peacefully on October 29, 2020 at the Chinook Regional Hospital. She was born on February 16, 1938 at the Cardston Indian Hospital, Viola was the eldest daughter of the late Pete Weasel Moccasin and Ada (Hoof) Weasel Moccasin.

Our Mother lived a full life, one that we as her children can only dream to aspire. Joyce was a caring, compassionate woman, who lived life to the fullest despite hardships along the way. She was not a selfish person, as she was always one to help the less fortunate. When her mother fell ill; Joyce, at the age of five years old, became a nurse to her mother and helped maintain the home while her father worked in the pea factory to support them. Joyce did not attend school until she was 8 years old at the St. Paul’s Anglican Residential School. She wanted to attend nursing school in Calgary, but her Father who was very traditional did not allow her to pursue her nursing education. In the early 1950’s it was still the custom for arranged marriages to good families. Joyce accepted her father’s choice for her to be married to Percy Old Shoes. They went on to be married for 35 years until Percy’s passing in 1991. Through out their marriage they built a home in the original Standoff town site, with a picket fence, a green yard and many Lilac bushes. They eventually built a homestead in So’kooh’tsi and then retired to Lethbridge where they lived at the Haig tower until Percy’s passing.

Joyce furthered her education later in life, she pioneered the basic skills program from the Lethbridge Community College, when they brought a satellite campus to the Lavern Community. She returned to school to upgrade her English and Math skills. Joyce opened the doors for Native students to be accepted and respected at the Lethbridge Community College. Joyce worked in several job positions such as Housekeeper, Apple Picker in Yakima Washington and at the Standoff Day Care despite our father wanting to provide for his family through the Canadian Pacific Railway. When she retired from the work force, Joyce went on to volunteer for various organizations such as the Lethbridge Collegiate School as a Culture Teacher. Percy and Joyce volunteered their services to the Friendship Centre. They volunteered and raised funds to bring the Old Agency Hall to be a recreation centre, they travelled to Taber to choose the building and see the centre be completed for the community.

Our parents (Percy and Joyce) were instrumental in reviving our Blackfoot traditional ways, they realized that these ways were becoming endangered. The elders were passing away with their knowledge but thanks to the Magpie Horn Society they revived our Sundance. For 13 years as the bundle keepers of Pi’no’toyi they worked tirelessly to help people far and near, native and non-native. The late Adam Delaney was impressed with their caring and giving attitude that he requested Percy and Joyce be given the honor to accompany Prince Charles into the Sundace in 1977.

Joyce was a long time member of the Motoki Society (iih’ta’po’ta’po’p) and she was instrumental in ensuring that the our traditional ways were not lost. She was one of the younger members of the group and was called upon to perform the numerous ceremonies. She was the keeper of the Long Time Cree Medicine Pipe (Sii’ na’yah’koyniman). Joyce was very privileged to be a keeper of these bundles, she always thought about our young people and their future. Joyce was humble and not one to glorify her deeds or accomplishments she preferred to stay behind the scenes and to make sure our people would be safe and healthy. She always included family, the sick and less fortunate in her daily prayers. For four generations the knowledge of herbal doctoring has been passed on and Joyce received this honor from her mother Ada. She then passed it onto her son-in-law Jeff.

Percy and Joyce were the original advocates for Repatriation of Blackfoot ceremonial items that were found in museums throughout Alberta and Canada. These items were successfully returned to the Blood Reserve. They also took a bundle from the Edmonton museum and the curators could not stop them, that was a major coup for our parents. Joyce put all her time and energy to keep our Blackfoot culture alive and she went above and beyond to learn the teachings and protocols of our ceremonies.

Our mother had the opportunity to travel with the delegates from the Blood Tribe (Treaty 7) to London, England. The treaty rights of all first nations were in jeopardy, the Canadian government wanted to abolish them. The delegation included: Percy, Joyce, and Mark Old Shoes; Pete and Dan Weasel Moccasin; Laurie Plume, Les Healy, and Mike Bruised Head. They were a part of the presentation on the history of the treaties to the Monarchy. Today if it were not for the brave delegates from Canada our treaty and lands right would have been abolished.

Through out Percy and Joyce’s marriage they did everything tother, which included travelling the pow-wow trail, they won numerous dancing titles. They travelled to Crow Agency, Yakima Washington and through out Cree Country to the north. During these travels they made many friends far and wide. They enjoyed playing hand games; Joyce was feared for her home runs during a game. She entered numerous tournaments with our father; she was instrumental in opening hand games to women in Cree Country. In 1975, the first international year of the woman, they travelled to Hobbema to play in the big Easter tournament. They were denied entry because women did not sit or play in the front row, they only stood in the back and watched the men play. The Blood women were a part of the hand games not just spectators, they stood their ground and won the tournament. After Percy’s passing, Joyce mentored, tutored and played with Sandra, Curtis and Sylvia; they travelled to Fort Duchene, Utah, Fort Hall, Idaho and La Push, Washington. Our mother was a tough teacher, and she would say: “we came to play and win not to just donate”. We won lots of tournaments and money games. Her youngest daughter, son-in- law and grandchildren began to take interest in hand games. Our mother was not one to sing but our father was a well-known singer on the hand game trail. She had many recordings to help teach us the old songs; our mother helped us revive hand games to keep it going in our family.

Our mother was a snowbird who loved to travel to Spokane, Washington to winter there with Philistine and her family. She came home during the summer to attend our annual Sundance. When the travel became too much, she came home to the farm to stay until her passing.