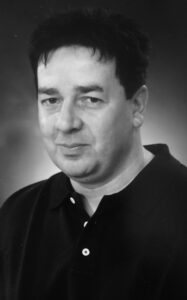 Dr. Zoltan Daróczi of Lethbridge passed away at the Chinook Regional Hospital on Thursday, October 29 2020 at the age of 57 years.

A Letter from his Daughter

Zoltan was born to Julianna Koti and Lajos Daróczi on March 22, 1963 in Komàdi, Hungary. His family lived in a small town in the eastern part of the country where his mother worked as an elementary school teacher and his father as an officer in the Hungarian State Railways.

Shortly after his birth, Zoltan and his family moved to Ócsa, the city where he would grow up in. When he was 4 years old, his brother Tamàs (Thomas) was born and because their parents were away a great deal of the time, Zoltan took it upon himself to take care of his little brother; the two of them grew to be very close.

Zoltan and education were inexorably linked from his earliest beginnnings. As the first child in the Koti and Daróczi families, his grandfather and uncle Steve would spend hours on end telling him stories. It was because of them that Zoltan developed a rich vocabulary and imagination as well as the ability to read at a very young age (3)! As a child growing up in Hungary, Zoltan was incessantly curious about the world; his favourite subjects were history, science, literature, and poetry. According to his childhood friends, Zoltan was a very quiet, caring, and smart kid who had a great sense of humor, always smiling and willing to help others. Zoltan graduated Summa Cum Laude from high school.

Zoltan loved punk music and the likes of Johnny Rotton, Clash, and the Hungarian band, Beatrice. Listening to music also helped him to learn English and dream about a world beyond his birthplace. Zoltan also had a great passion for soccer. His favourite Hungarian team was the Ferencvàros and he commonly sported the team’s famous white and green colours.

On July 9 1993, Zoltan married Kati Szép in Budapest, where they had first met. They loved each other very deeply and shared a passion for travel and seeking out new knowledge That same year they left Hungary for an education and life in the United States. Zoltan worked as a teaching and research assistant for the next few years at Iowa State University while Kati worked to support them both. In 1995 and 1997, Zoltan obtained a Master of Science in Agricultural Economics and a Master of Business Administration both from Iowa State University.

In 2002 they welcomed me, their daughter, Adrienne, into their lives. Zoltan worked tirelessly to be good father and gave everything he possibly could to his family. He wanted to watch his daughter grow up, and thankfully, he did.

Zoltan suffered a stroke in December 2004, giving rise to one of the most inspirational stories ever told. For 16 years, Zoltan fought until the end, and his inner-strength was astounding. I am sure that every person who knew him would agree with me that he was truly heroic for what he had to endure. He was my hero, never to be replaced, remaining in all our hearts forever.

My mother and I would like to express our deepest gratitude to all the people that have surrounded our family with care and support over the years. While this includes the entire Lethbridge community, we especially want to give thanks to two groups: The University of Lethbridge, Faculty of Management (now the Dhillon School of Business), who continued to support Zoltan even after his first stroke; and the Hungarian Cultural Society, for the endless amount of love and helping hands, they have given us.

The number of individuals involved in Zoltan’s life has been countless, and it would simply be impossible to name all of them here. However, Zoltan’s life would not have been as full if it were not for the work of Paul McDonald, Bob and Suzan Boudreau, and Laszlo Horvàth. Regardless of their schedules, each took time out of their lives to organize Zoltan’s living arrangements, financial matters, and medical care. Zoltan very much cherished their visits.

From beginning to end, they were the people behind everything, and no amount of ‘thank yous’ could ever be enough.

Now, at the end of Zoltan’s life, it is difficult to know how we could ever repay him for the strength, humor, wisdom, and joy he shared with each and every one of us on a daily basis. From being a son to a brother, and a husband to a father, his was a life that will never be forgotten. As Zoltan himself said, “it wasn’t easy, but I did it.”

A Private Family Service will be held for Zoltan.

For those who wish, memorial donations in Zoltan Daróczi’s name may be made to the Edith Cavell Care Centre, 1255 – 5 Avenue South, Lethbridge, Alberta, T1J 0V6.