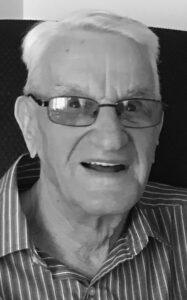 Donald Edward Gassner passed away peacefully in Brooks, AB on Saturday, November 14, 2020 at the age of 90 years.

Born on April 13th, 1930 in Kindersley, SK to Fred & Wilhemine (Minnie) Gassner, where he was raised on the farm with his 10 brothers and sisters. Hard work was instilled in each of them at an early age and he was known for his energetic spirit and drive. As a young man he bought a truck and started his own trucking company, and traveled throughout Western Canada when a warm place to stay and road maintenance was scarce.

He married his wife, Helen Margaret ‘Merle’ Peardon, in 1952 and was devoted to providing for her and their 3 children. Moving to Calgary where he was employed for the city gas company, his yearning to work for himself never stopped and in 1963 he rented some land west of Granum, Alberta where he began his farming career. He soon purchased his own farm and working closely with his family, he farmed until he and Merle moved to Lethbridge in 1983. Again with the need to keep busy he worked as an adjuster for the Alberta Hail & Crop Insurance and traveled throughout southern Alberta for many years until his retirement at the age of 65.

Throughout his life he enjoyed being with his friends and family visiting over a ‘drink’ and this continued in Lethbridge with his good friend Ron, and on many occasions he assisted him with carpentry and plumbing jobs that needed to be completed. He was a great handyman and was constantly working on his home and yard to ensure it was well maintained. He grew a beautiful garden and was happy to share the extra vegetables with his friends and neighbors.

Beloved husband to Merle for 61 years, until her passing in 2013. Loving father to Gordon (Donna) Gassner, Larry (Lena) Gassner, Jacolyn (late Robert) Thiessen. Dear grandfather to 17 grandchildren and 11 great grandchildren, as well as brother & uncle to many. The family will hold a service for Donald in Kindersley, SK in the spring or summer 2021.

In lieu of flowers, donations may be made to the Charity of your choice.