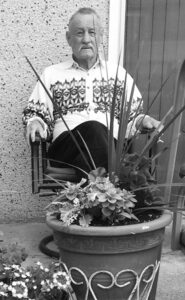 JONATHAN WALDNER, beloved husband of Anna Waldner, passed away peacefully on November 20, 2020 at the age of 75 years old.

He is survived by his wife, Anna, and their two sons, Cal (Debbie) Waldner of Coalhurst and Mendel Waldner of Bow Island. He is also survived by his grandchildren, Garry, Scott, Randy, Karen, Rhonda, Raquel, Priscilla and Megan, and his siblings, Helen, Susanna and Walter.

He was predeceased by his parents, Jacob and Suzanna Waldner, and his sister, Emma.

Jonathan spent a majority of his life at the Ponderosa colony where he was the farm boss for many years. There he was known for his innovation and progressive farming. Jonathan was a hard worker and that was displayed in the bountiful crops he produced. Among his friends, he was nicknamed the “Canola king”. Later on, Jonathan took on the responsibilities of financial manager which he excelled at as well. Preservation of wildlife was a passion that followed Jonathan throughout his life. He loved sharing his knowledge of taxidermy with others and amazed people with his artistic abilities. Jonathan would collect moose antlers and carve fine detailed pictures of wildlife on the antlers. Jonathan will be incredibly missed by his family and friends. His faith in Christ is a great comfort to his family and they rejoice knowing He is with his Lord and Saviour Jesus Christ.

(THE EAGLE HAS LANDED)

A Private Family Viewing will be held at Cornerstone Funeral Home.

In lieu of flowers, donations can be made to STARS or HALO Air Ambulances.