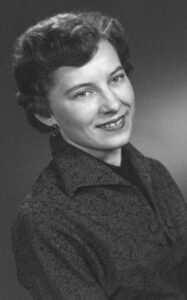 It is with great sadness that we announce the passing of Olga Monica Geddes (nee Burak), beloved wife to the late Don Geddes, who passed away peacefully at the Chinook Regional Hospital with family by her side at the age of 81 years.

Born in Bienfait, Saskatchewan and raised on the family farm in Estevan, Saskatchewan, Olga had a great love for Arabian horses and was an accomplished English Rider. She joined the Air Force for a short time and later married Don on September 16, 1961 in Estevan and raised 2 children, daughter Donna (Rob) Geddes and son Glenn (Dee) Geddes. She is also survived by her 2 grandchildren Lorne (Arielle) Geddes, Scott (Citabria) Geddes; 3 great-grandchildren Asher and Evelyn Faherty-Geddes, Kendrick Geddes; brother John (Brenda) Burak as well as numerous nieces, nephews and their families.

Olga was predeceased by her parents Peter and Ann Burak; uncle Joe Burak, and husband Don in August of this year.

A Private Family Graveside service will be held at a later date in the Archmount Cemetery, Lethbridge, Alberta.

For those who wish, memorial donations in Olga’s name, may be made to the Canadian Kidney Foundation 310 – 5160 Decarie Blvd. Montreal, Quebec H3X 2H9.