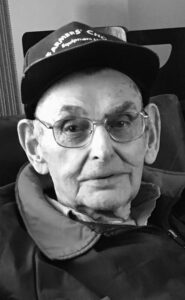 Maurice is survived by his wife, Frieda; his son, Michael Wendelboe; and his grandchildren, Erik, Paul and Emily Wendelboe. He was predeceased by his son, Sydney Wendelboe.

Maurice was born in Barons, AB on September 18, 1930. Always a caring and thoughtful man, Maurice helped his father on the family farm. He was the only son in his family, with four older sisters: Ruth Issac, Josephine Grigor, Laura Stevens and Vivian Theilman.

Maurice was characterized as a hard worker, and as such, had various occupations during his life. His first jobs were with the family farm in Barrhill, and the Picture Butte Sugar Factory. Maurice married his soulmate Frieda on June 20, 1952. Then, in 1958, Maurice built a Texaco service station in Champion, AB which he ran with his wife until the family moved to Lethbridge in 1967. When he first moved to Lethbridge, Maurice worked at the Research Station and then Co-Op Implements as a heavy duty mechanic. At age 50, in 1980, Maurice attended SAIT with his son Michael. They both obtained steam engineer certifications and with this, Maurice worked as a Steam Engineer at a Lethbridge meat packing plant until his retirement in 1995.

While he was retired from his formal occupation, he could never sit still and could always be found in his garage tinkering with his several projects. He had such a creative mind, being able to create works of art out of the most unassuming objects, such as old tin cans, old rims and propane cylinders. He would give his friends and family these gifts and we all treasure them.

Maurice volunteered many hours at the Chinook Regional Hospital, Lethbridge Seniors Centre and others. He devoted over 1,300 hours to his volunteering. In the summers, he would help with the harvest at the Coyote Flats Pioneer Village and was a devoted member to the Prairie Tractor and Engine Club in Picture Butte. In his free time, Maurice loved to do the Wonderword puzzles in the newspaper and spend time with his grandkids. Notably, you could see Maurice with the smile on his face when he would dance with his loving wife and soulmate Frieda at the annual Pemmican club dances. Maurice was known for his bear hugs, selflessness, humour and kindness. He was always ready to help anyone in need and worked countless hours on people’s vehicles—often for free. He will be fondly remembered by all who knew him.

A Private Funeral Service will be held at a later date.