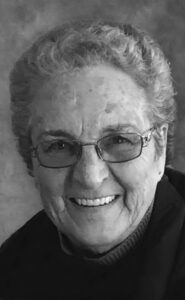 It is with great sadness that we announce the passing of a dedicated wife, mother, grandmother, great-grandmother daughter, sister, cousin, aunt, and friend. CARLA RAE VAN BEZOOYEN (née Eagleson), of Beazer, AB passed away after a brave and hard fight against cancer on Sunday, November 29, 2020 at the age of 68 years.

Carla was born on August 22, 1952 in Lethbridge, AB. She grew up in the Warner/Milk River area with her parents and five siblings. She enjoyed running, rodeo, and hanging out with her older brother Robert and his friends. She graduated from Erle Rivers High School. She married her husband Clifford Link. They had four daughters, which most definitely kept her hands and her heart full.

In 1989, she married Hendrick (Hank) Van Bezooyen. Not having children of his own, he gained 4 daughters and over the years: 11 grandchildren and five great-grandchildren while loving every minute of it. After getting married, they built a new home on the Van Bezooyen family farm where they lived and farmed until 2012. Many memories were made there between having farm animals to care for, the family reunions, Christmas dinners, birthdays and even a wedding! They then purchased their forever property and built the home of their dreams in Beazer, AB. Carla was such a perfectionist and everything had to have a place just the way she wanted it. If it was not done to her approval, she would make a comment about it and then change it herself. Carla enjoyed the peace and calmness of her yard and took great pride in the gardening and landscaping. She also enjoyed sitting on the porch or going for walks to take it all in.

Although they loved their home, they also have traveled to Holland, Cuba, and Mexico.

Carla was an avid and exceptionally talented crafter, everything she set her mind on doing turned out perfect. Her favorite pastimes were sewing, and quilting the many, upon many quilts or table runners on Lucey (her quilting machine), painting, crocheting, jewelry making, and needlepoint. She also loved playing her bass clarinet in the Lethbridge Community band.

Special thank you to all of the health care professionals that have cared for our Mom during this uncertain and unpredictable time.

A Celebration of Carla’s Life will be held at a later date. During these times, we ask that people celebrate in their own cohort and raise a toast or crochet hook to Carla. In lieu of flowers, donations may be made in Carla’s memory to the Jack Ady Cancer Center or a charity of your choice.