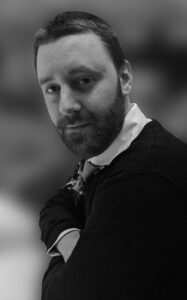 David Alastair James Woodroffe, beloved husband of Jody Woodroffe, passed away at the Chinook Regional Hospital on Friday, November 27, 2020 at the age of 34 years.

David was born on August 12, 1986 in London, England and immigrated to Canada in 1992 with his parents and sister Katie. David worked for his father where he became qualified as a full-service financial advisor and insurance agent. On his dad’s retirement, David switched to a full-time insurance agent with AMA and received his Chartered Insurance Professional designation.

David was extremely intelligent and enjoyed any activities that challenged his mind. His many interests included chess, poker, and drumming. From the age of 12 when he arrived home from school he would say “Dad let’s play chess!”. Alan told David as soon as he was able to beat him, he would give David 10 dollars. David quickly earned that 10 dollars and was rarely ever beat again. He was passionate for soccer; he never missed a Tottenham Hotspur match. He inherited his father’s sense of humour and would always have a sharp-witted retort prepared.

A Private Funeral Service will be held at 1:00pm, on Friday, December 4, 2020 at The Miz City Church. The family invites you to watch the Private Service via livestream at the Miz City Church webpage, https://www.mizcitychurch.com/.

In lieu of flowers the family is accepting memorial donations in David’s name to the Crohn’s and Colitis Foundation of Canada, 600 – 60 St. Clair Ave. East, Toronto, Ontario M4T 1N5, or AW Ministries (helping the poorest in the Philippines) through Bridges of Hope International, 2825 F 2 Ave. South, Lethbridge, Alberta T1J 0G8.