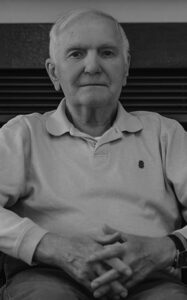 It is with profound sadness that we announce the passing of ALOYSIUS JOHN THOMAS. Al passed away peacefully in his sleep in the early morning hours of Monday Dec. 7, 2020.

Al will be deeply missed by his daughter Kandis, son-in-law Bruce Topolnisky and his two grandsons Oliver and Owen Topolnisky of whom he was most proud. He is also survived by three sisters Jenny Butler, Louise Stone, Debra Weikum and his brother Fred Thomas.

Al was born on April 28, 1931 one of seven children to Frank and Mary Thomas of Holdfast, Saskatchewan. In his younger years after leaving the family farm he worked in seismic drilling off of both coasts of Canada and over much of northern Alberta and B.C. During this time he met Freda Mueller and they were married on May 11, 1957 and settled in Calgary to raise their new daughter Kandis and son Michael.

Al started working at Shell Canada in Calgary as a telecom analyst for network systems support which had him working on some of the first computers being used at Shell. This work led to many travels to various Shell gas plants all over Alberta where he installed all of the network infrastructure for the computer systems used in those times.

He retired from Shell on Oct. 1, 1991 and started on the first of many projects around the house that included a new kitchen and a beautiful sunroom addition that he totally constructed by himself. In addition to assisting Bruce and Kandis with building a home in Sylvan Lake, Al was always building and refinishing various pieces of furniture. Al enjoyed playing golf and always carried his clubs in his vehicle to try a new golf course to play with friends and family.

Al and Freda also enjoyed travelling, and one of their most memorable trips took them to the Maritimes and the lower eastern seaboard of the United States. After Freda passed in 1998 AL took up wine making and wood carving, and we still treasure today some of his most intricate beautiful carvings.

Al was predeceased by his son Michael in 2018.

Kandis and Bruce would like to thank all of the staff at Fort Macleod Extendicare who looked after Al and deeply cared for him in his last year.

As per Al’s final wishes, there will be no memorial service and he will be cremated, with his ashes to be spread in Kananaskis at a future date.