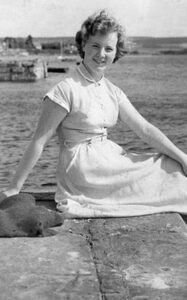 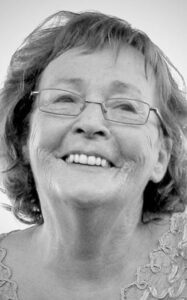 Wistfully we mourn the passing of our Mum, Gran and Sister, who lived a life selflessly devoted to God, her family, friends, students and the underprivileged.

Her tireless research of – and practical work in – theatre and drama proved the beneficial link between them and academic performance. Her doctoral thesis established that drama education is no mere frill, but is important to the formation of attitudes and values in young people. Her students – elementary, junior, high school and university – adored her. She inspired far too many to count.

Her artistic and creative talents were many. A gifted theatre director, she began by staging elaborate high school musicals in Lethbridge and Calgary that exceeded any reasonable expectation of what “kids” could do. She expressed herself beautifully in poetry, drawing and painting. But she was no arts snob: she loved The Beautiful Game, often yelling at the players on TV to “get your act together!”

Maureen loved unconditionally. She fretted over her siblings and children, and defended them ferociously. Her grandchildren were the lights of her life and a constant source of pride. They were fascinated by her stories and wisdom, sitting around the table long after meals to listen.

She was always far more interested in others – what they felt and knew – than in herself. She gave generously of her time and modest financial means to those less fortunate, including complete strangers. She adored the dog and cats she spent her later life with, and her eyes lit up talking about the chickens out back!

Her inimitable Scottish brogue was often deployed in favour: students and children were “chookie bendies” or “wee sausages”. But she brooked no blether, and fashioned short work of those who “talk nonsense.” Misbehaving children were warned “ther’ll be wigs on the green” or “a trip to the Humby Home.” We never knew what those things were, but sure didn’t want to find out!

But above all, Maureen was defined by her faith. A lifelong and devout Roman Catholic, she meditated and prayed diligently. She was an active and integral part of every Church community she joined, creating and participating in committees, liturgy groups, meditation groups and choirs. She ministered to the Eucharist and served as a lay reader. She lived by the word of James that “Faith without works is dead”.

Maureen was born by the sea, and she said often that it was her wish to die there. We are so happy that her last memories were of the beautiful coast of south-west Vancouver Island.

And we are so fortunate to have had her in our lives.

A private virtual family service will be held on Saturday, December 12th with a celebration of life to follow at a later date.