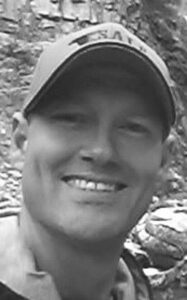 Jason was born in Grand Prairie Alberta on October 9, 1975. He moved to Beaverlodge Alberta when he was 15 years old. He made many lifelong friends there that have many wild tales to share. When he left home, he moved to High Level Alberta where he met the love of his life Becky. They were married in 2003 and moved to Fort Macleod soon after.

Jason was a hard worker. He became a windmill technician and worked in the wind industry for many years. He later became a journeyman electrician.

He loved fishing, hiking, camping and indulging his wife’s love for Disneyland. Jason loved visiting his extended family in Nova Scotia and being at the beach there. Even though he was an Albertan, the salt water was definitely in his blood. He loved the Atlantic seafood!

Jason loved to play! He would go sledding with his children, build Legos with them, and was thier biggest fan when they were skating, performing on stage or playing the piano.

He was a faithful member of The Church of Jesus Christ of Latter-Day Saints. He served in various callings such as scouting, teaching and as ward mission leader. He loved attending the Temple and enjoyed taking his daughters when he was able to.

Jason was diagnosed with pancreatic cancer in May 2017. He was determined to fight and did so for the next 3.5 years. In those years Jason and His family made many memories going to Disneyland, Cuba, Caribbean Cruise, Hawaii, Europe and other destinations.

Jason was loved and respected by all whom he associated with. He will be greatly missed. “A life that touches others goes on forever.”

Thank you to the team at the Jack Ady Cancer center, the Palliative care team, community paramedics, and Fort Macleod home care for your loving kindness and excellent care.

One Condolence for “GOUCHIE, Jason”