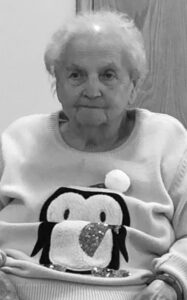 ENOLA BLANCHE HOYT BEREZAY, slipped away quietly on Dec. 21, 2020, holding the hands of two of her dear daughters. Certainly, Enola is now safely in the arms of her beloved husband, Dean Albert Berezay. She is also probably holding and caressing her long ago lost baby, Tommy.

The family would like to thank Enola’s doctors, and the kind and caring staff at the Lee Crest Facility for their patience and genuine love. Thanks also to Legacy Funeral Home, for assisting the family at this most difficult time.

A private family graveside service was held on December 23, 2020.

Enola was born July 26, 1929. She was raised on Tom and Dixie Hoyt’s ranch in the Del Bonita area. She is their oldest child. She loved riding her horse Peanuts, and working outside on the ranch with her dad. Women’s chores were not really in her skill set at that time.

Enola was only eighteen when Dean made her his bride, a name that he called her for as long as they were on this earth together. Dean knew he had married the prettiest girl in the area, and most every day, he told Enola how beautiful she was. After living 91 years, raising ten children, doing plenty of hard physical work, and handling the ups and downs of real life, Enola gave up her youth and beauty for love. She loved her family the most, but she always had love for one more. Her non-judgemental and unconditional love was constant!

When she got married, Enola learned all of the women’s chores, and she lived by what she taught her children. “If something is worth doing, it is worth doing your very best, to accomplish it!”

Enola was willing to assist with any service opportunities in the church and community. She gave her best to each assignment! She served well in every calling she was given in the Church of Jesus Christ of Latter-day Saints. Dean and Enola served two missions for the church, giving exceptional effort, and creating countless friendships that will last for eternity.

Enola gave selfless service at the Chinook Foundation as their head cook. Giving up many personal holiday meals, to make sure that the residents got all the home cooked foods they missed. She gave much of her spare time to the Agricultural Society, helping them with concessions and doing anything that assisted with the programs they run. She assisted anywhere and at any time there was a need in the community.

Many have been invited to sit at Enola’s dinner table to sample her scrumptious scones, famous fried chicken with milk gravy, many more marvellous meals, and even a popcorn ball at Halloween. She is known for being able to make something out of nothing, and her family will tell you that she was very proficient at that! Many amazing outfits, edible concoctions, and activities were invented due to necessity, with her clever mind and hands.

There were many road shows, girl’s camps, picnics, bonfires, sledding parties, dances, and other awesome activities that Enola helped organize and carry out. She taught her children to work, but to always have a good time doing it. Enola could make picking berries, preserving apples and cherries, cleaning the house, baking a cake, washing the dishes, weeding the garden, and any other chore you can think of… fun.

Enola’s children thought she was a natural healer. She could bandage the wounds and heartaches in their lives, and she was a great listener. She didn’t try to fix their mistakes, but was always there to catch and console them when they fell. Her handwriting was so elegant and perfect, that her children had to forego any forgeries. The sound of her voice as she read many favourite books with her children at her knee, was always a source of peace and comfort to them all. She opened a world of adventure and excitement through the books she read, and took her family to places that they could never afford to go.

Enola supported her husband and children in all their sports and other activities, even rodeo. Maybe she was trying to thin the herd, but she was always there cheering them all on from the sidelines, and making sure they got to their next practice or game. She never allowed her children to be quitters! The biggest sport she participated in, was keeping Dean in check, and that was pretty much a twenty-four seven Olympic event.

What a wonderful woman! She was humble, but still proud. She just got up every day, and did her best. Enola took very little for herself, and out of next to nothing, she made a difference in her community and to her family. She was a daughter, sister, wife, mother, aunt, and grandmother. What an amazing life! She will be missed.

Due to COVID restrictions a private family funeral is being held.