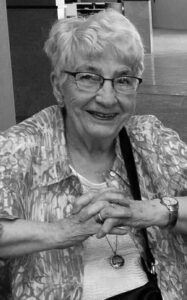 Harriett Helen Jacobson departed this life on Thursday December 17, 2020 in Lethbridge, Alberta at the age of 94, beloved wife of the late Lloyd Jacobson.

Harriett, daughter of the late George Heather and Matilda Heather (Otteson) was born in Bassano, Alberta on May 14, 1926. She was raised on a farm in Milo, Alberta, graduated from Milo High School and then completed a seamstress course in Calgary, Alberta. That seamstress course was the beginning of a lifelong love of sewing and quilting.

Harriett married the love of her life, Lloyd Francis Jacobson, on July 14, 1949 and resided on the Jacobson family farm near Enchant, Alberta for the majority of her life till moving to Lethbridge.

Harriett was actively involved on the farm, raising 4 children, growing a huge garden and of course always had her sewing machine on the go. She was active in the Enchant Community Association, in the Ibbestad Lutheran Church, the Craft Club and Seniors Club in Enchant where she, with the other members, painted and fired ceramics, painted landscapes, did hardanger embroidery and quilted. How she loved to create those quilts.

She was predeceased by her parents George and Matilda Heather, her husband Lloyd Jacobson, her brothers Alvin (Hap) and Jack Heather and her sisters May Corbiel, Donna Gordon, and Joanne Chambers.

A private family Memorial Service will be held at 2:00 p.m., on Tuesday, January 12, 2020. The family invites you to watch via livestream at https://www.mbfunerals.com/ and then scrolling to the bottom of Harriet’s obituary. A link to watch will be available 15 minutes prior.

For those who wish, donations may be made in honour of Harriett directly to the Good Samaritan Society Park Meadows Village,15111 15 Ave N, Lethbridge Alberta, T1H 1W2 or a charity of your choosing.

One Condolence for “JACOBSON, Harriett”