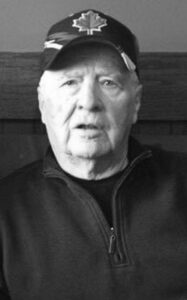 Mr. Al “Mattie” Mathison of Lethbridge, beloved husband of Mrs. Grace Mathison passed away at Chinook Regional Hospital on Monday, December 28, 2020 at the age of 88 years.

Mattie was born and raised in Gleichen, Alberta and left there as a young man to work in northern Alberta on the seismic crew. When at home one summer, Mattie met Grace on main street in Gleichen and that began their 65 years of life together. They were married in Great Falls in 1955. As a young married couple they lived in Calgary, where Mattie worked in the Burns Meat Plant. After a work place accident that resulted in the shortening of a few fingers, he left the cutting floor and moved to an order desk. It was during this time that Mattie and Grace welcomed their first of two daughters Jo, followed a few years later with the birth of Jeannie. In 1964, Mattie was offered a sales position and territory in southern Alberta, and the family re-located to Lethbridge. After retiring from Burns Meat, he became a seasonal worker for the gas company where he loved working with the “young guys”. He was always selfless, as he was first to say “lay me off first, hire me back last, let the young guys work because I am just here for fun!” After working the distress room at the Pepsi Co., Mattie began a long lasting friendship and a deep connection with Paul and Dorothy from the Cranford Colony. When Mattie retired from day-to-day work life he lived for the spring so that he could go back to his roots and help on the Sauve Farm. He loved driving around in circles, pretending to be a farmer; but fall was where is heart really was, he loved to harvest and knowing that hockey season was right around the corner.

If it was Friday at 4:00pm he could be found with his buddies at Bully’s for a beer and planning the next golf game. During the week he had a regular morning visit with the City Crew at the Enmax. Those who knew him say that he will leave a huge void at the arena and shared some great conversations about the many current topics and a million laughs.

In 1982, Mattie was made an honorary life member of southern Alberta Old Timers Sports Association, he spent numerous years as a member of the board of the directors of the Lethbridge Hurricanes Hockey Club, and prior to that the Lethbridge Broncos. He was a Lethbridge Hockey Hound for 42 years and it was only fitting, that he spent the last week of his life wearing his Hockey Hound t-shirt. So, if you’ve been to a hockey game chances are you bought a 50/50 ticket or a program from Mattie. Grace would say “never plan anything on game day” and we re-arranged all family events if there was a game on the same day. Mattie was a tireless volunteer for Sutter Brothers Golf Tournaments in the 80’s as well.

Mattie was looking forward to walking Kodee down the aisle at her upcoming wedding in July and now will be watching over her instead.

Mattie was pre-deceased by his parents, all of his siblings and his first grandson Harley Korthuis.

Mattie was a very humble man, he survived a two year battle with cancer, and never once complained.

A Celebration of Mattie’s Life will be held at a later date. Please remember Mattie by sharing stories and a toast with your close friends and loved ones.

In lieu of flowers, please purchase an extra 50/50 ticket next time you are at a Hurricane’s game. Or please donate to the Lethbridge Hurricane’s Hockey Club Education Fund, #2, 2510 Scenic Dr. S. Lethbridge, Alberta, T1K 7V7.