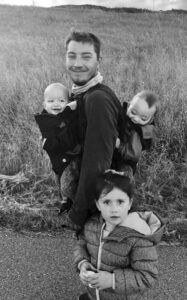 It is with heavy hearts that the family of Mr. Cody Wilfred Lencucha announce his passing on Saturday, December 26th, 2020 at the age of 28 years.

Cody was brought to our world in the loving arms of Craig, Lesley, Jenna and Cole Lencucha on September 4th, 1992 at the Lethbridge Regional Hospital. He started his life at an early age on a journey of love, heartache, and health issues. These moulded him into the unique man he was with God’s own special call.

His first and foremost love were his twin sons, Bowie and Sawyer, their sister Maya, and mother of the children, Meghan Phillips. This love extended to his grandparents, parents, brother, sister and their spouses, uncles, aunts, cousins, nephews, and his dogs, and continued even in his passing. This was evident during many conversations we had fueled by emotion, love, and his unwavering commitment to his beliefs.

No matter when life’s challenges were weighing him down, he never turned down an opportunity to spend time and play with his nephew, Coen, especially if it involved a baseball and bat.

From a young age until his last breath, he saw the world as a place where you do not ignore suffering from any form of life and held a special place for those who were lost. Often as a child, he would stop when he saw someone on the streets suffering, and using the money he had, he would give it all to ensure they knew the soul of a child recognized them as someone. This continued everyday throughout his life sharing his cigarettes, money, and kind words when he had nothing else to give.

His health challenged him both physically and mentally through his battle with cancer, his struggle with addiction, and the growing loss of loved ones in his life.

Even though at times he believed he did not deserve the love of his family, he continued to hold his values close to his heart.

Some of his most valued memories after family carried onto the baseball field. He would tell us the best years of his life were in Lethbridge American Legion Baseball playing beside his brother and solidifying some of his strongest friendships and memories. He held the highest respect for his coaches and their decisions, understanding it was for the team and not him.

His passion, grit, and need for perfection continued in his work ethic, pride and quality of workmanship he displayed even with a fatigued body and soul. His last job held a special place in his heart with Flynn Canada in the construction and addition to the Cancer Centre in Calgary, working alongside his friend and mentor Rydian.

As health, fatigue, and loneliness formed a dark cloud over him, God finally decided he had suffered enough, picked him up in his arms, and carried him to a place of peace from his body and mind.

We who loved you will forever hold a tear in our eye, a place in our heart, and a smile everytime we hear his laugh.

We love you and you will always be missed.

One Condolence for “LENCUCHA, Cody”